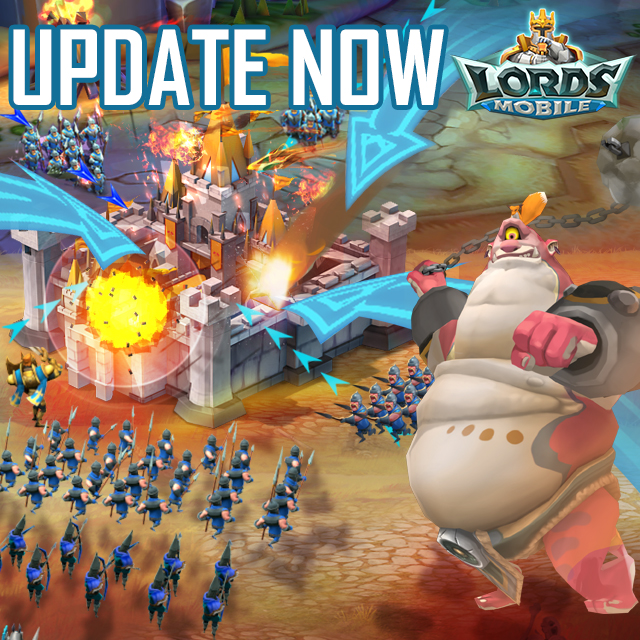 Kingdom Clash: Fight 1-on-1!
Take down your rivals!
Ready your weapons and lead your kingdom to victory! To the victors go the Gem lodes!
During the event, earn solo, guild, and kingdom points by occupying Wonders, killing rival soldiers, destroying rival traps, gathering resources, and hunting monsters in rival Kingdoms. Show that your Kingdom is the mightiest and you could be rolling in riches!

Additional Notes
- A new year is around the corner! The citizens of Lords Mobile set up new decorations on the buildings to celebrate!
- New Event: Kingdom Clash – Pay attention to the Event Board to see when the event begins! (There are different rules for occupying a Wonder during Kingdom Clash. Check "About Wonders" for more details)
- Wonder Fort Boost revision: Similar boosts will no longer stack.
- Streamlined Talents interface: Added a Max button for all Lv 16+ Castles.
- Streamlined migration process and interface.
- Fixed an error with Bookmarks.
- Guilds that moved their home Kingdoms will now receive messages from their new Kingdoms.
- Various UI improvements.

Lords Mobile programmers: Please go fix the redirect for UpdateStrings.plist on the server 70.42.236.221. You are sending a valid 302 response; however, the content is an HTML doc with only the text "redirect...". Please correct this issue. IGG ID 372477266 for troubleshooting compensation ;-)

Broken worse than before now guys. Come on..
http://lordsmobile.forum.igg.com/m/topic?ctid=3626