It's that time again, Guild Fest! It's one of the best opportunities for some huge rewards, so understanding what you are doing is key to finishing well!

R4 Notes: Guild leadership has the extra responsibility of leading and guiding the whole guild effort! If you are an R4 or R5 for your guild, take special note of the R4 Notes!

So there are two sets of Guild Fest rewards to consider. The first is the ranking rewards. 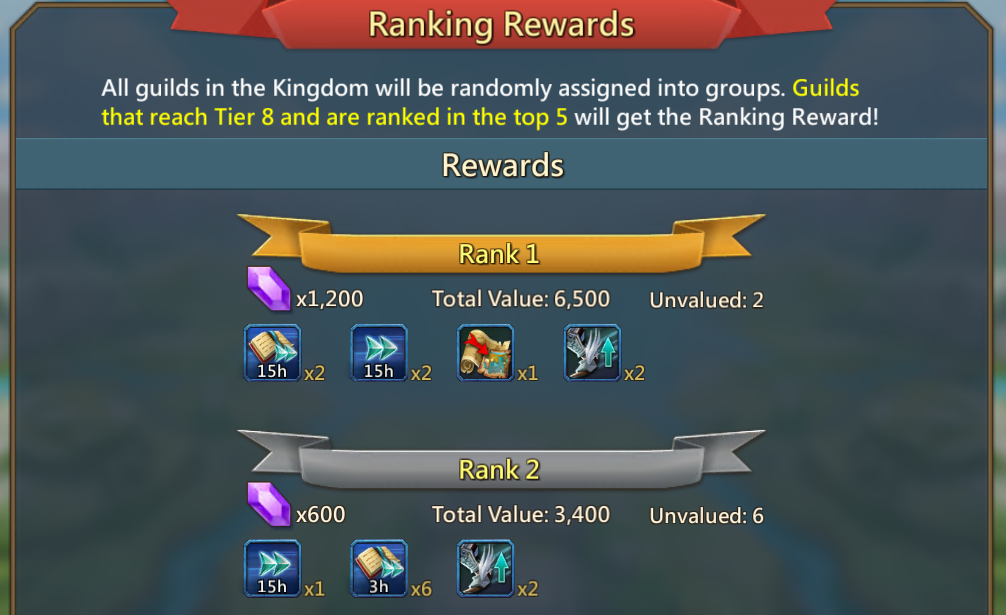 20 eligible guilds from different servers are randomly grouped for competition and the top 5 performers are rewarded accordingly. It’s important to check and see how you are doing compared to your direct competition.

The second set of rewards are tier rewards 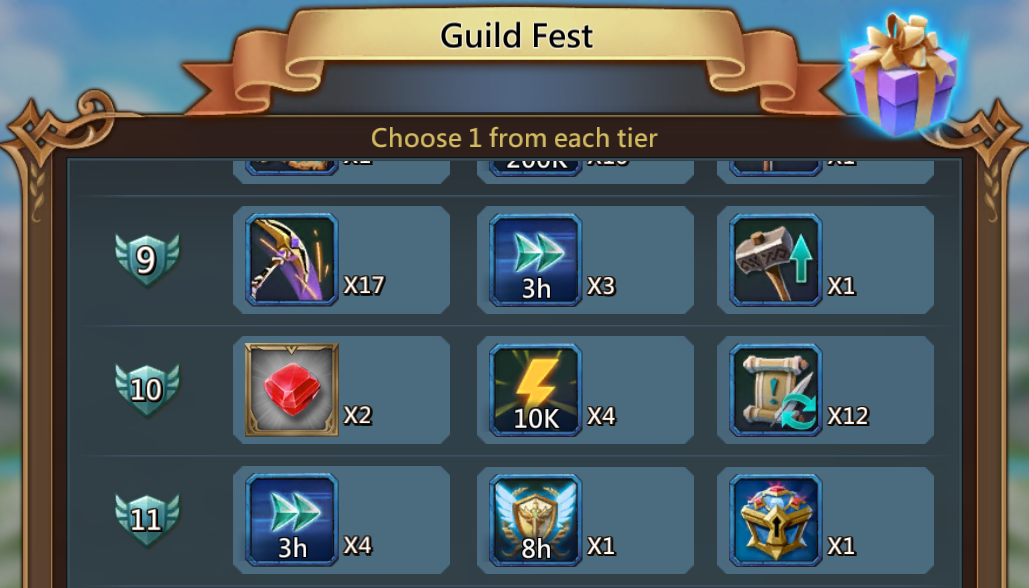 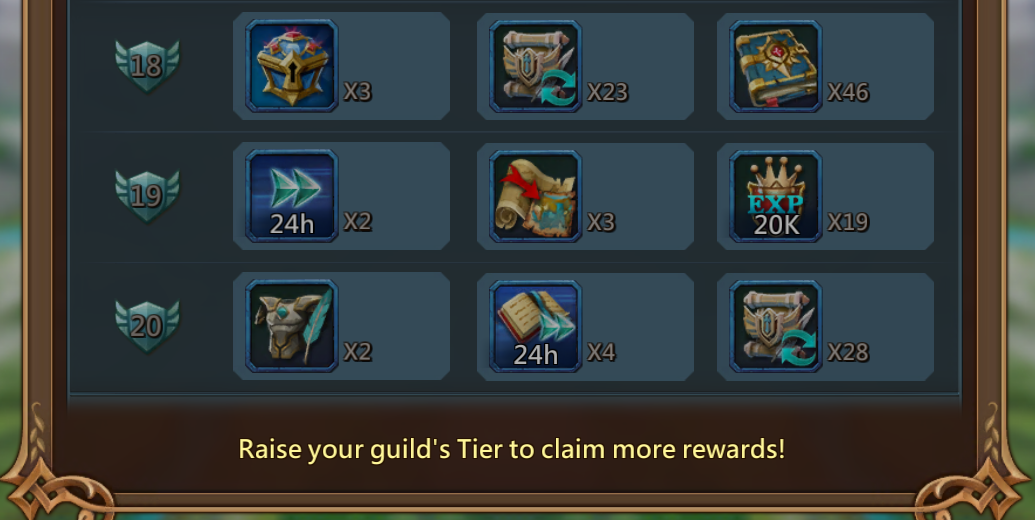 R4 Notes: This is where goal setting is important. Each eligible member (castle 15 & up) has 7 attempts, so multiply your eligible guild members by 7 to get your quest number. Now take the requirement for the tier you want to hit and divide by quest attempts to get your goal quest value. Ex.

So you would know that each member needs to average 60 points per quest to hit your goal! 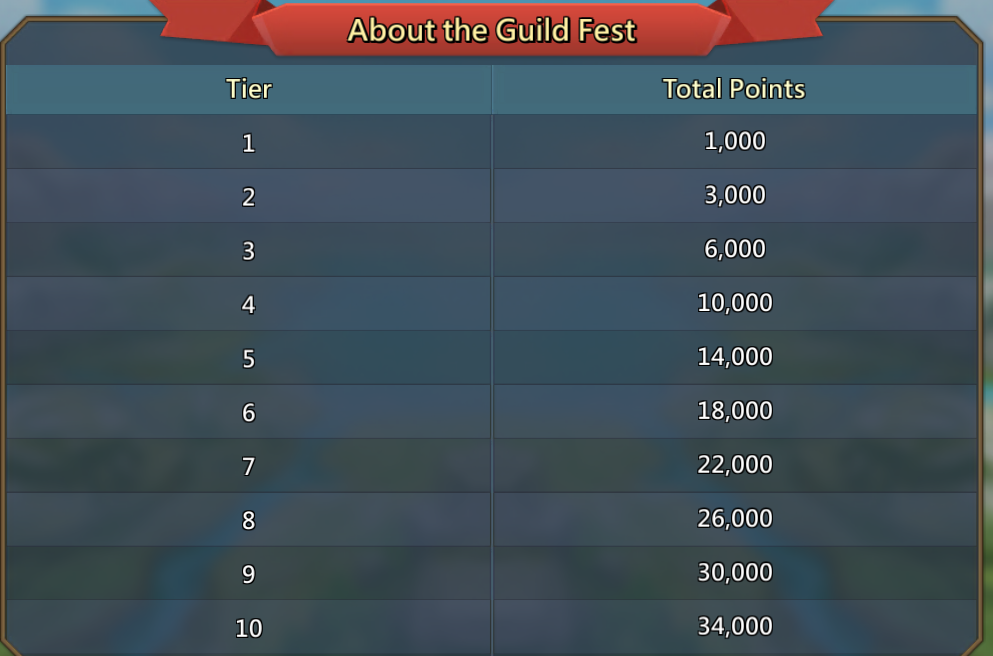 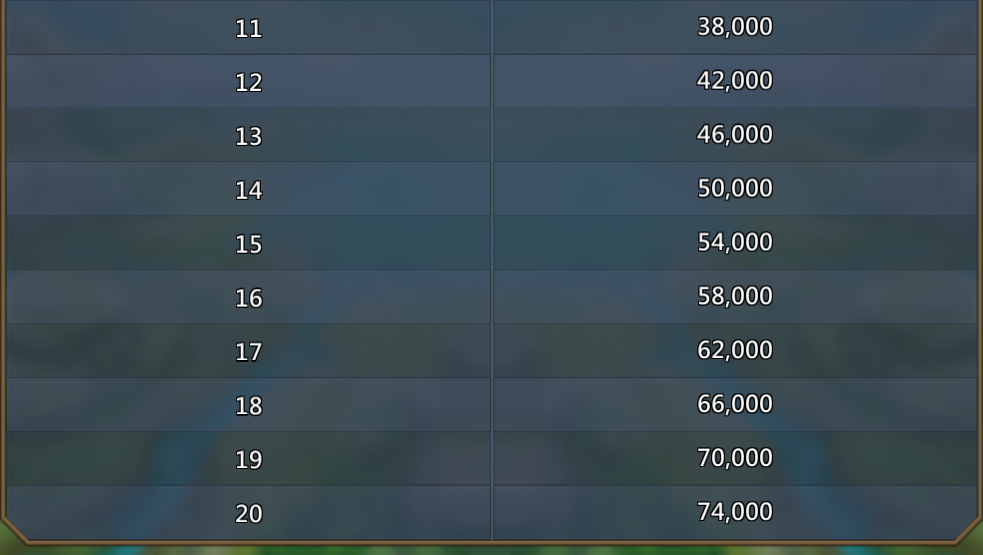 Each member has 7 quest attempts and 7 days to use them. Now that you know about what score value you are looking for, take a look at the available quests and see what is there! While looking, here are important guidelines to follow

Take quests you know you can complete! If you are not sure, do your guild a favor and find out before you take the quest.


Take your time! You have 7 days to participate, so taking a lot of fast, easy, low point quests will actually hurt your guild performance. Save the quick ones for the end, but in the beginning, focus on the achievable high-value quests.

R4 Notes: You can keep track of how many attempts each player has used, and how many quests have been successful, as well as each member’s total contribution. It is good practice to publically acknowledge those with a great success ratio and/or high contribution, and to privately encourage those who appear to be struggling.

There are many, many different kinds of quests. Here is a brief list of them and some notes for success. (Points and  duration values are estimates and vary based on specific quests.)


Gather – Medium Points, Long Duration
Gathering quests are usually 5m rss or more. Lv 2 tiles have 330k, lv 3 has 540k, and lv 4 has 945k (except food and gold) so depending on where you are you could be looking at clearing between 10-15 tiles. Make sure you have enough troops and marches to gather that much in the given time period, and enough access to resource tiles.


Supply – Low Points, Medium Duration
This is a great quest to take if you have just gathered 5m-10m of a specific resource for a quest. See if anyone needs it for their own guild quest – otherwise ship it to your bank or a shielded member.


VIP Quests – Medium Points, Medium Duration
Depending on your VIP level, you may have access from 1-6 VIP quests per day. This quest should be easy to complete if you are in need of some last-minute points.


Mystery Box – Low Points, Medium Duration
This is the treasure chest that appears in the bottom right corner of your turf screen, and it refreshes every hour. To win this quest, you’ll need to check back frequently, but this is an easy quest to succeed at.


Guild Helps – Medium Points, Medium Duration
You ought to be doing this anyway, so taking a guild help quests is an easy way to score some quest points during your play if you will able to check in frequently.


Guild Quests – Medium Points, Medium Duration
In your quest menu, you get a number of guild quests every 6 hours. If you are VIP 8 or higher, you can auto complete these! If you have enough Guild Quest refreshes, you can knock this one out quickly.


Guild Coins – Medium Points, Medium Duration
If you have been doing helps and/or using guild quest scrolls, you may have build up quite a reserve of guild coins. Look for a quest to spend these, and then spend your coins on materials you need to complete other Guild Fest quests like speedups, relocators, or scrolls.


Admin Quests – Medium Points, Medium Duration
Like the guild quest, there are some quests requiring you to complete an number of Admin quests in your quest menu. If you are VIP 7, you can auto complete these. If you need more refresh scrolls, buy them in the guild store!


Kill Troops – High points, Medium – Short duration
These are some of the best values for Guild Fest quests, and have varying degrees of difficulty. You will need to have some relocators or a pretty good number of random relocators to search for targets, and you will need to be sure that your leader has reset talents for combat to minimize losses.


Heal Troops – Medium points, Medium – Short duration
If you just completed a kill troops quest, you are going to have some injured. If there are enough to complete a heal quest, go ahead and grab it. (If not, you can always grab another kills quest first).


Increase Might – High points, Medium duration
There is usually a specific way in which you are required to increase might – troops, research, construction, hero armies, or quest rewards. It is usually best to only take these when you are planning to finish a big build, as the rewards can be good, but are very difficult to complete.


Researches – Low points, Medium duration
Completing the research quest is actually not difficult if your Academy is not busy. Depending on your VIP level, you may have certain researches that have been neglected and can be completely quickly with just a few speedups and/or the free speedup timer.


Hell/Solo Event – High points, Medium duration
If you are able to coordinate the completion of several Solo or Hell events with your regular turf growth, take an available Event completion quest. These can be difficult, but have great payouts. If you see this and you have some saved gems or speedups, see what the current events are.


Use Turf Boost (item) – Medium points, Short Duration
There are super simple. If you have the item(s) and you need the points, take the quest and use the items.


Speed up (time) – High Points, Short – Medium Duration
If you see this quest, look and see if you have the necessary amount of gems/speed ups to complete it, and then see if you need to rush a timer. If so, taking this quest before rushing the timer.


Spend Gems/$$$ - High points, Short Duration
These have really great point values, and usually require some spending. If you are a P2P player, these are good for a quick, surefire boost to your Guild Fest performance.


Coliseum Fights – Medium Points, Long - Medium Duration
You get 5 per day. Check the duration of the quest and the reset time for your attempts and see if you will have enough attempts to complete the quest.


Clear Hero Stages – Medium Points, Long – Medium Duration
Check your stamina and the duration of the quest to see if you have enough to complete this quest. If you have bravehearts or needed them to farm for medals, you can do that while this quest is active.


Coliseum Rank – High points, Medium – Short Duration
Improving your rank in the Coliseum is always a good idea. If you are a consistent contender and you believe you can raise your rank, this is a good one to take.

R4 Notes: Help you guild stay on track! You have the ability to remove quests that you don’t want anyone to take, so if a quest is too small or too difficult, remove it! Only leave available the quests that will benefit your guild the most. After removing a quest, another will pop up in 30 minutes.

With all these quests, there are 2 main strategies that are used to help success;

These 5 quests can be coordinated to lead into each other and provide a total of 350 points – that’s an average of 70 per quest.

Take Guild Fest Quests for things you were going to do anyway. Ex.

Completing Ranged Offense lv9 is worth 360k might and takes 3+ Weeks. However, if it happens to be close to finishing and you see a Might (Research) quest available, you can take it and rush the research to finish.

Two days prior to the start of Guild Fest, an announcement will pop up in your news alerting you that it will be starting soon. This is when guild fest starts! Start stockpiling guild coins, speed ups, gems, and resource items. The most you have available when Guild Fest starts, the easier it will be to complete the quests once Guild Fest starts!

Guild Fest is a great opportunity not just for you as a player, but for your whole guild to see explosive growth. Put some thought into your effort, and treat your quests as a responsibility to your entire guild! Communicate your needs – your guild wants to help you succeed!

R4 Notes: Coordinating the effort is key to success! Be ready to communicate specific goals and requirements, and maintain your available quests to guide your guild to success. You are the key to victory!

Question...if your in a guild and completed fest then you are kicked out after guild fest is over but b4 you collected reward are you able to collect reward?

I just became leader of my guild n hv a question!!! Members that score 0 during GF but were eligible to participate, do they get to claim any of the rewards on collection day???

The main topic here states a bit about Resolved Choices: Stories You Play Apk Mod (limitless Diamonds) for android, so we can hope that this was what we all are in need for the first time ever. Maybe we all will be able to go for https://toponlinegeneral.com/top-6-assignment-writing-tips-nobody-talks-about/ in the academic writing context so there are others who will also be able to see that for the very first time ever.