Lords Mobile is one of the most played games in 2019. It is strategic-based and it takes a lot of time to develop your levels and castles. As many new players start to play Lords Mobile, they don't know what they should do to maximize their gameplay in the early days. So here, I'm giving my two cents on what you should be doing and how to get the most out of the game at the first time of the week.

Redeem these free codes: LM001 (through Redemption Code) and buy the Rose Knight Medals Pack if you are a p2p player. It costs only 1 USD but gives many Gems and Speed Ups (more than its value). 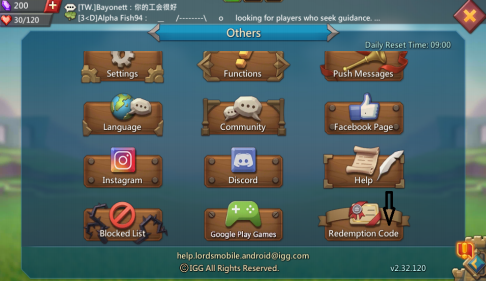 Check the [News] tab on Events board and find the following news to redeem the code if you play on the iOS version. 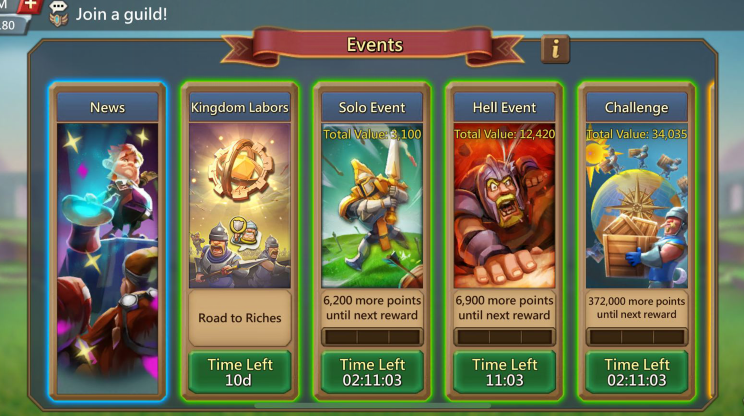 Link your Google, Facebook, or Game Center Account to Lords Mobile. This will give you 200 Gems and which you can use to buy VIP points. Don't buy 100 VIP points which costs 150 Gems. You need to get to at least VIP 5. 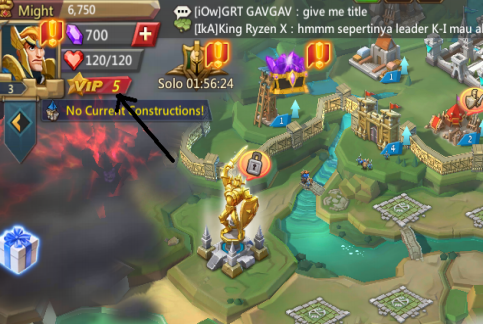 Join a guild. This gives you free 400 gems for the first time. There are many benefits to joining a guild. It helps protect you from enemy attacks. You can also chat with your guild members, ask them for help, and get items and resources to help you grow faster. 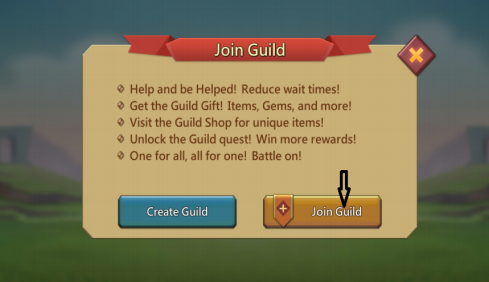 Talents are one of the most important aspects for doing almost everything here in Lords Mobile. Remember to put your Talent points on the left side of the Talents tree and focus only on maxing out Construction and Research speed. Just put minimal points on others to pass through the talent tree. 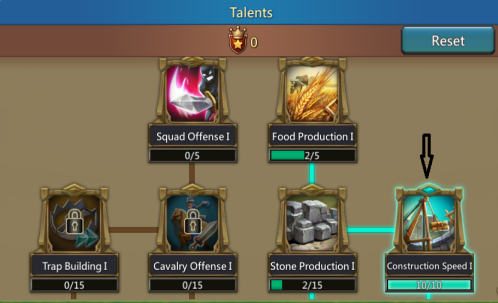 Just click Go and follow the quests all the way up to upgrading your Castle to Lv 4. After finishing the upgrade, you will see the Allied Voyage quest at the left side. Start clearing the Voyage Quests, which give you a lot of free Speed Ups and resources. If you download the game from an invitation link, you will also get welcome gifts when you link the account. 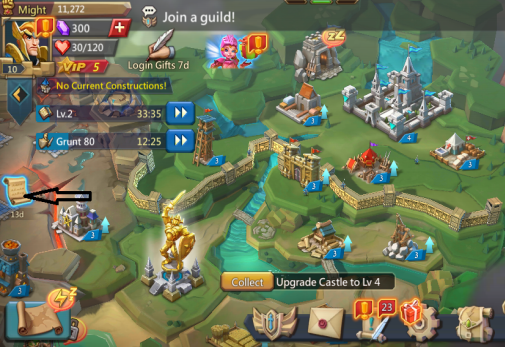 The Academy is the most important building you need to focus on during the early stages of the game. After every upgrade of your Castle, you need to upgrade your Academy building first as it gives a research speed boost and many research projects require higher Academy levels as you progress. 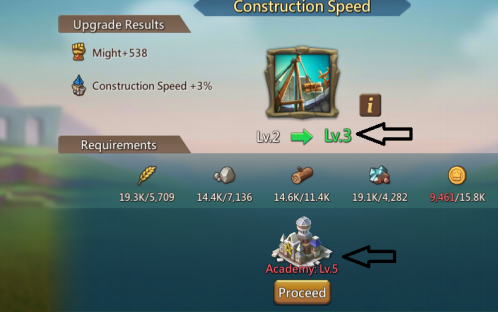 Research is another important aspect of Lords Mobile. You need to research Construction Speed first by going through Economy, and then Monster Hunt, which helps you get items and resources from the Monsters you hunt, followed by Military and lastly Defense. 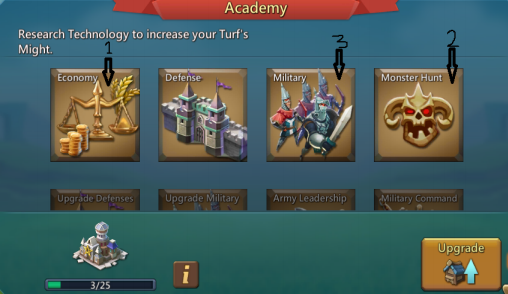 Troops are also an important aspect of Lords Mobile. Without troops, you will just be an empty castle, and someone at a lower might can easily burn down your castle. You already have Tier 1 Troops unlocked at the start. To unlock Tier 2 troops, you need to first build Academy Lv 9, then go to the Military research tree and research Tier 2 troops. Similarly, Tier 3 troops require Academy Lv 17 and Tier 4 requires Academy Lv 25. F2p players might not unlock Tier 3 troops during the first week of playing, but don't get discouraged. If you follow my steps, you can get there in a minimum of 2 weeks. Do not try to fight without unlocking Tier 2 troops, and training a decent amount of troops. 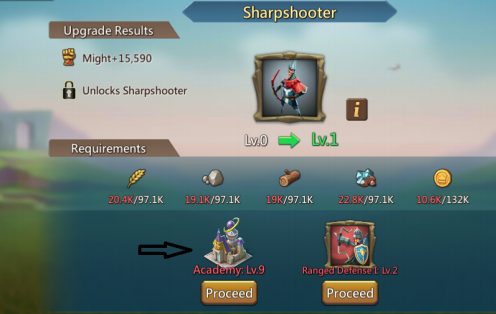 Heroes are another important aspect in Lords mobile. You need to promote and enhance your Heroes. Heroes can be promoted up to rank 8 and enhanced up to Gold grade. Grades go from White> Green> Blue> Purple> Gold with Gold being the highest and White being the lowest grade. You need Hero Medals for enhancement, which you can get from Elite Hero stages. For Heroes, enhance the golden trio first: Trickster, Scarlet Bolt and Sage of Storms, as they have support skills which give you construction and research speed. Secondly, you need to upgrade Black Crow, Tracker, Oath Keeper, Prima Donna, and Demon Slayer for Colosseum as ranking in the top 5,000 gives you Gems every 3 hours. You will need Stamina to clear Hero stages, which recovers over time. You can also use Bravehearts to regain Stamina (you can get 1 free daily from clearing daily quests). 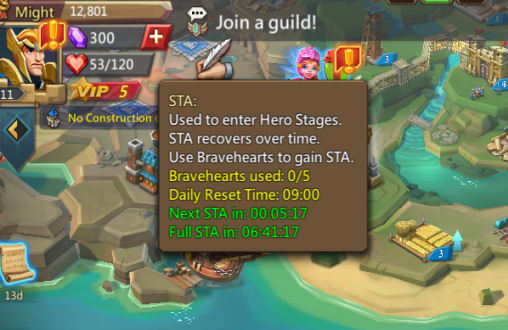 Equipment is also an important aspect in Lords Mobile. Equipment levels are from 1 to 60 and its Grades are divided into Common, Uncommon, Rare, Epic, Legendary and Mythic. Firstly, you need to focus on construction and research equipment, then military equipment, and lastly production equipment. 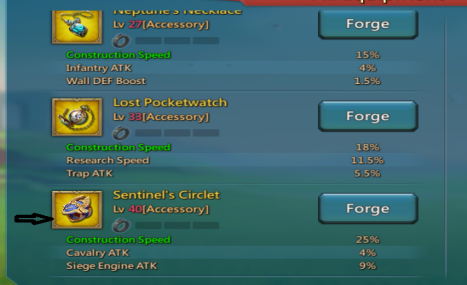 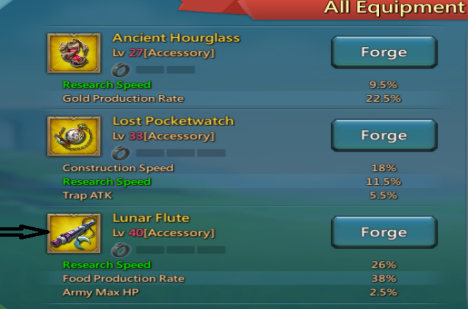 Thanks a lot for information dude! Im sorry for bumping old thread! play crazy time game by this link and win more!