by [#518] Mystic Yuka1
General Information
1. Gems are precious! Use them very wisely! You can buy literally anything with these Gems. Sometimes, it’s cheaper to buy items with Gems than buying packs.
2. Read an article describing the buildings in your Turf and how these buildings work.
3. Read the ingame tutorials as they appear. Do not skip them. They contain essential information for a newbie. 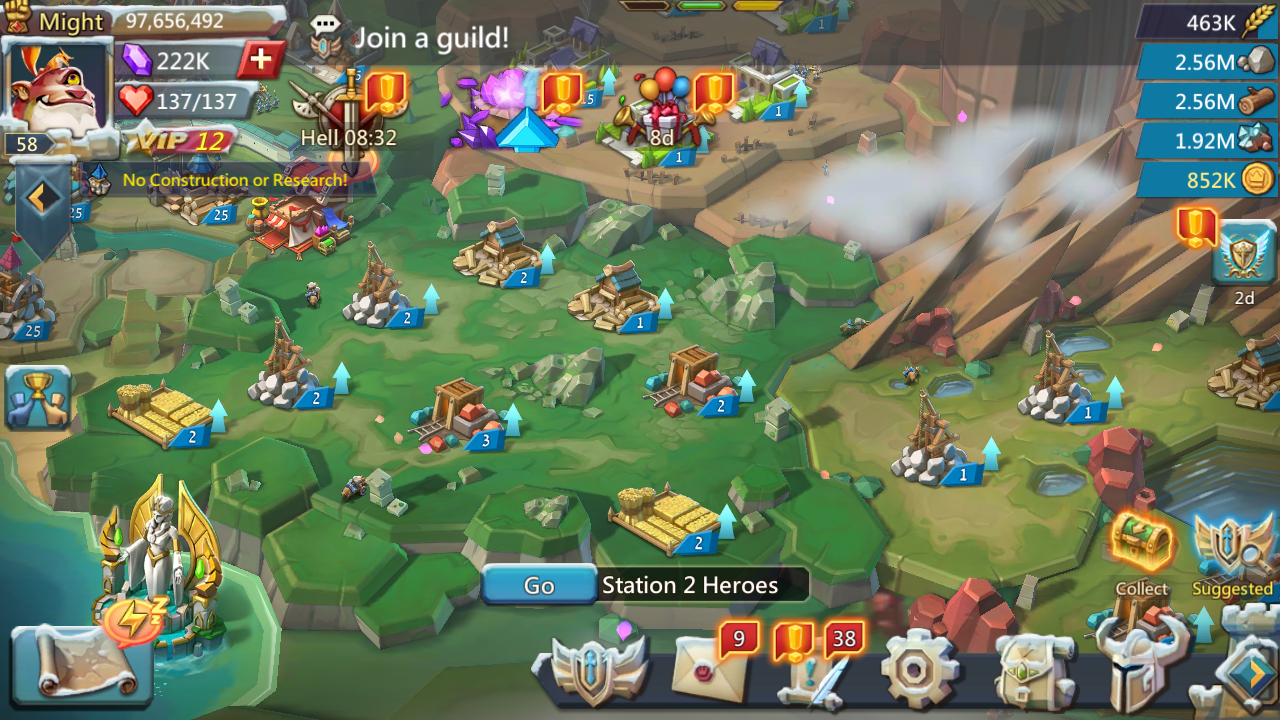 5. Gold: This can be found in the red resource building area (upper right). It is produced by Manors. Manors share the same space as Infirmaries and Barracks so you will need to keep an appropriate ratio according to your playing strategy. 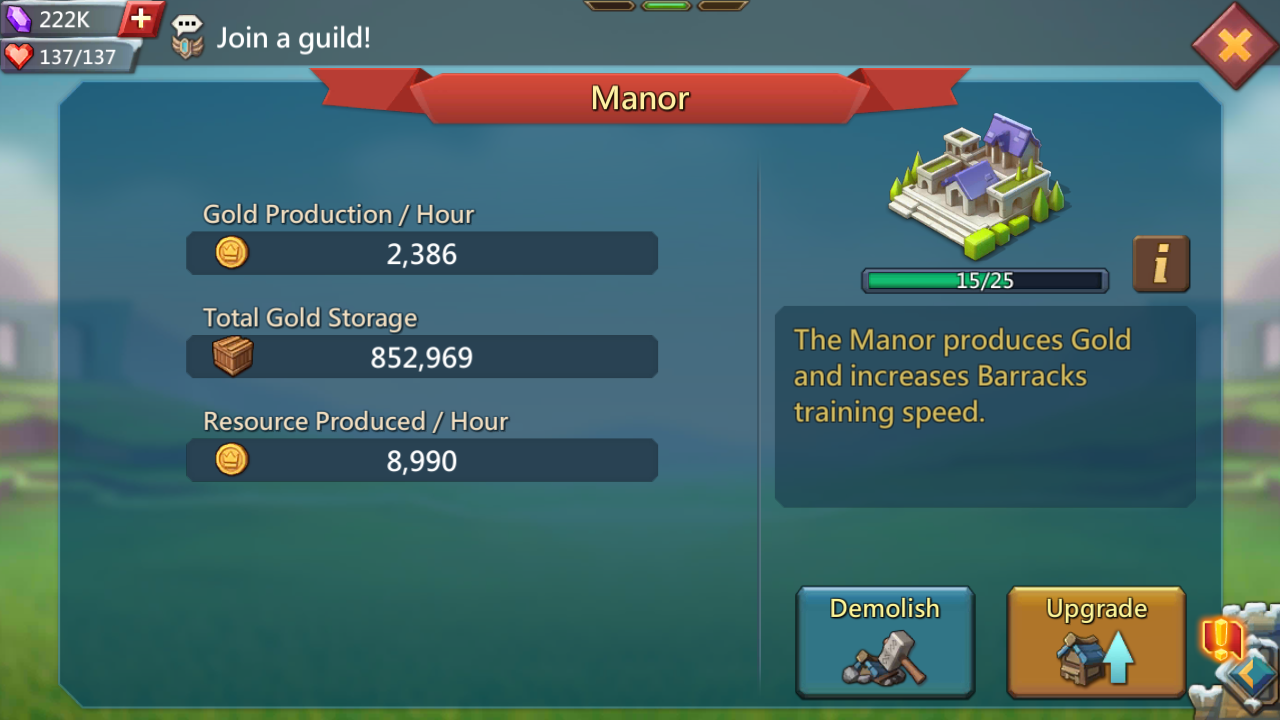 Guilds
This is a multiplayer game. You need to find the right companions as soon as possible. Friendships are important for a smooth journey in the game.
1. Join a guild. Any guild which has a lot of active players will do. They can reduce the time on your construction and research projects when they click the help button for your projects. 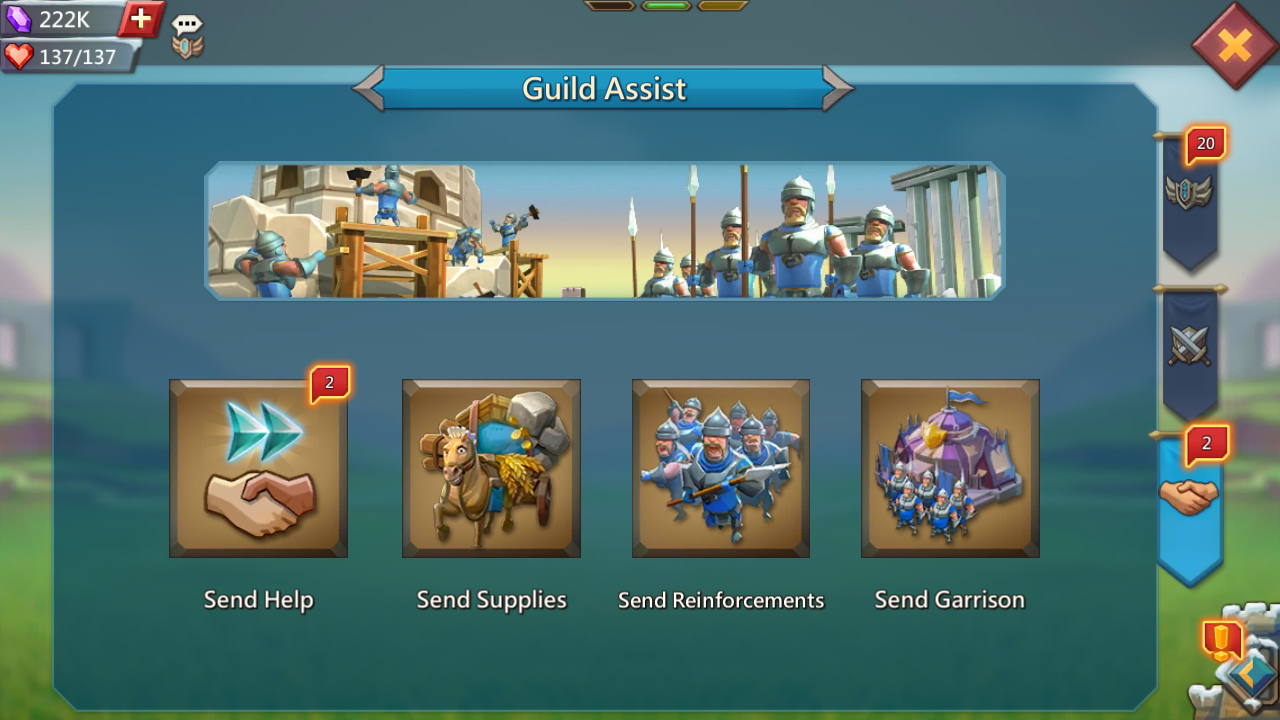 2. Prove your usefulness in the guild by participating in daily guild activities and other guild events like Guild Fest, Dragon Arena, etc.
3. Hunt monsters for more rewards. When a monster is killed, the whole guild will receive a gift box. 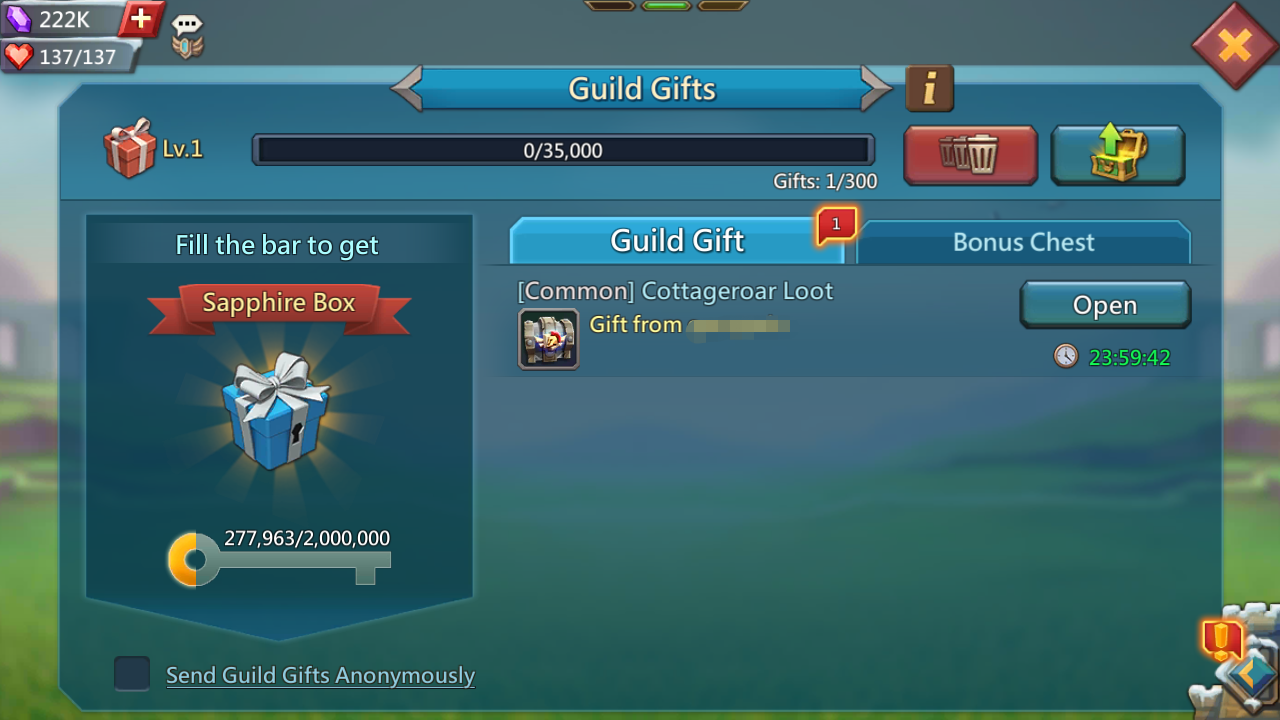 VIP
There are various perks provided according to your VIP level.
1. Get to VIP 6 using Gems or any items to unlock auto battle for Hero Stages. This will help you clear Hero stages easily to unlock new Heroes.
2. Don't spend a lot of Gems on VIP. You will gradually get it with consecutive logins. The more you play, the more points you’ll get. 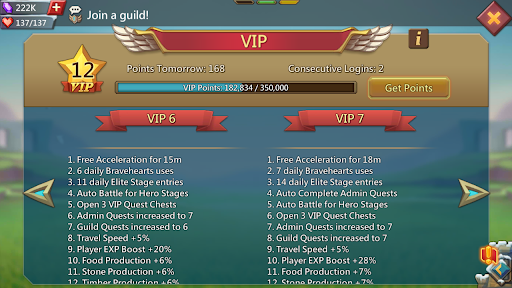 Troops
Troops are the main component of this game, but don't just train troops aimlessly in this game.
1. Make sure to train the right troops that suit your strategy.
2. Protect your troops! Admit that you can’t win battles in the early days so keep your troops safe in the Shelter or activate Shields.
3. And yes, troops are meant to die so don't feel bad if they do. The Infirmary and Sanctuary will save some of your troops so you won’t have to start from scratch. 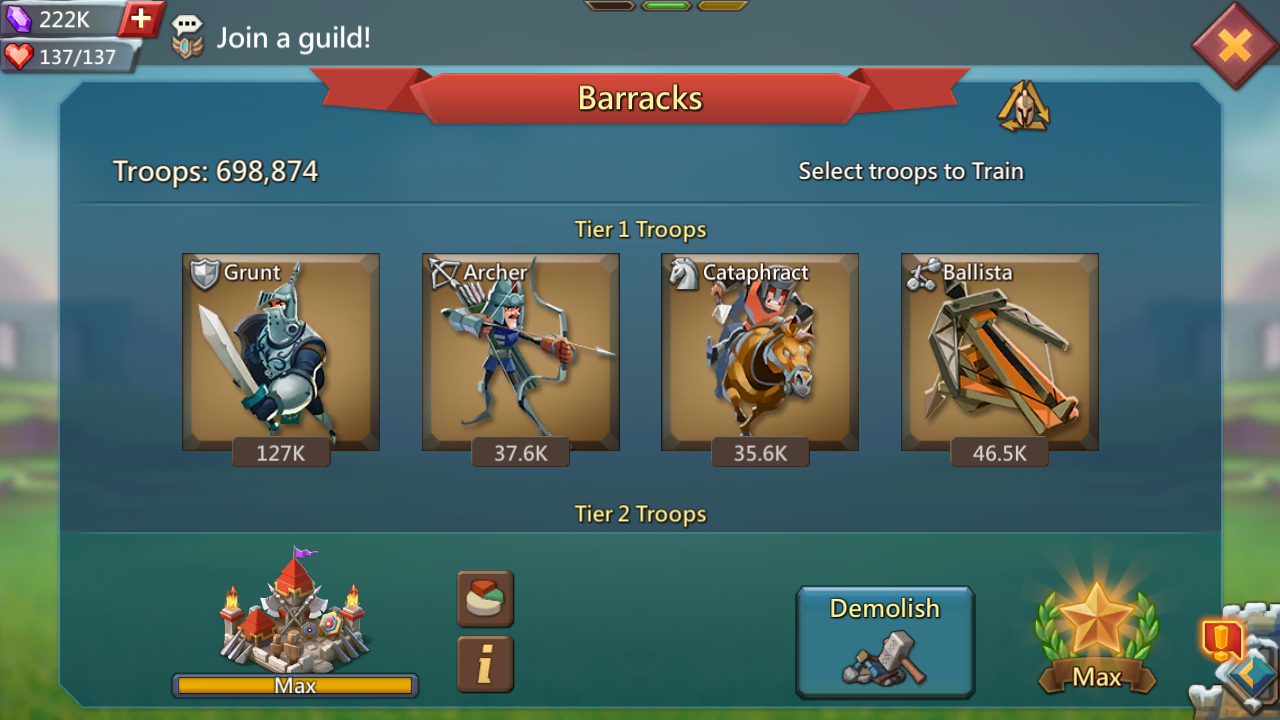 [justify]Skirmishes[/justify]
[justify]Invaders have occupied land in your Turf. You are supposed to reclaim this land and fill your Turf with buildings (according to what you require). In the first week, make sure to clear at least Skirmish 3. [/justify]
1. Defeat Skirmish 1, Skirmish 2, and Skirmish 3 in your Turf as soon as you start the game. Your initial troops are sufficient for these battles.
2. After Skirmish 1, build one each of the following: Farm, Mines, Quarry, and Lumber Mill.
3. After Skirmish 2, build an Academy and start working with “Construction Speed” in the Economy tree as soon as it is available (based on your Castle and Academy level).
4. After Skirmish 3, build as many Manors (Manors make gold) as possible. Build Barracks in the remaining tiles.
5. When you have enough troops, go for the remaining Skirmish battles as well. This should be done in the first two weeks.
Hero Stages
Clearing Hero Stages becomes relatively easy with VIP 6. Try and learn the manual battles as well because you will need it. An official IGG guide regarding this topic is already available in the news section of the game. 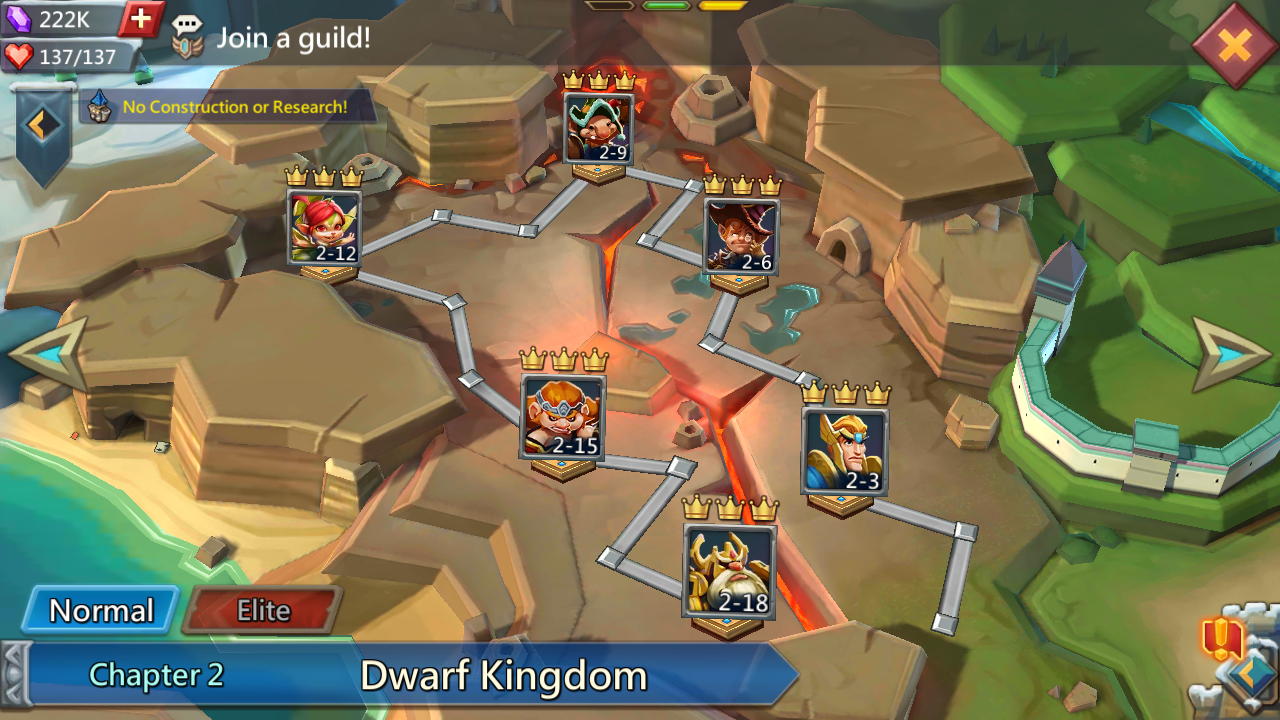 Allied Voyage
1. Remember to do the “Allied Voyage” in-game event that is available to every newbie.
2. It consists of simple tasks. Complete these for amazing rewards to start your journey and decide if you will keep playing or just quit. 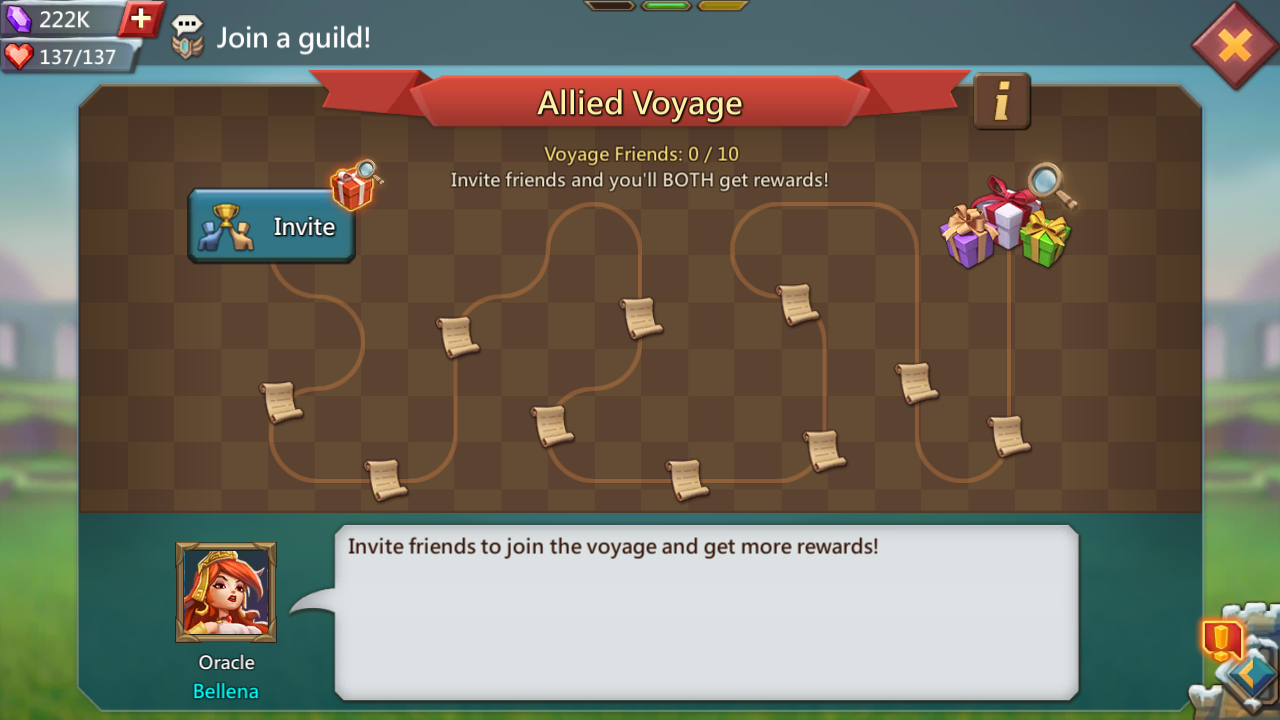 Colosseum
This is unlocked at Castle Lv 10 where your Hero team fights with other players’ teams to get a higher ranking. The higher you rank, the more Gems you get every 3 hours.
Cargo Ship
This is unlocked at Castle Lv 13. Here, you can exchange/trade your resources to get various things (namely other resources, Speed Ups and other in-game items). It provides 4 deals at a time and the deals are refreshed every 6 hours. 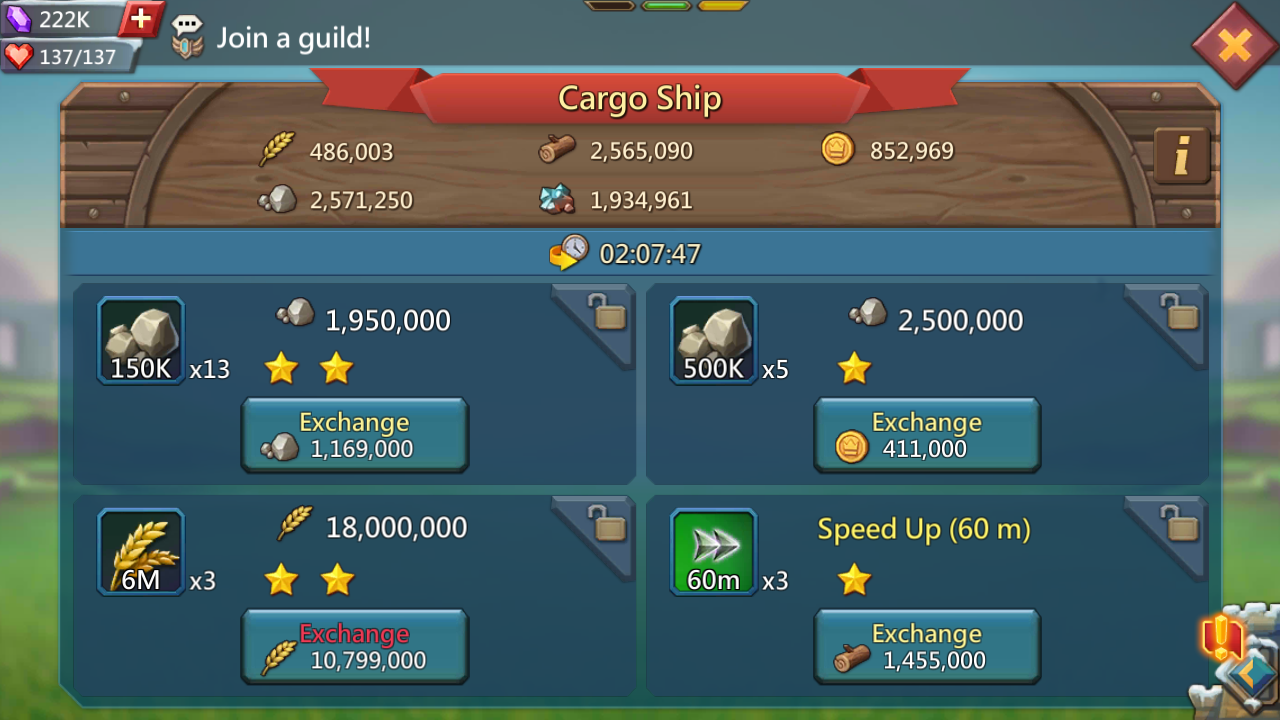 Where you will see yourself after a week
1. You will be somewhere between Castle Lv 15 to 17.
2. You will have all Skirmishes cleared except for Skirmish 8. (You may clear Skirmish 8 if you have a good strategy)
Future Advice
1. Start making troops at a normal pace.
2. You need to upgrade your Castle to Lv 17 as fast as possible to unlock Tier 3 troops. So just focus on upgrading the related buildings. Before you can train T3 troops, I would recommend you to train as many Cataphracts (T1 Cavalry) as possible for gathering resources from the map.
3. Keep clearing the remaining Skirmishes as you train more troops.
4. Skirmish 8 takes about 50k+ T2 troops to win. It is advisable to clear this as soon as possible as it unlocks Familiars, which is the future of this game.
5. And congrats, you are no longer a newbie! Check out the advanced guides! 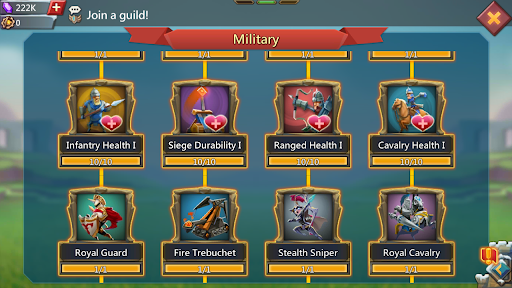