This is my 1st post.  If you see anything missing from the list of quests at the end, or anything else that needs changing, please let me know.


I have often searched for a listing of all the Guild Fest quests, and I have not had much luck finding any such listing.  I'm sure I am not the only one who has looked for something like this, so I decided to create my on, but I do not want to horde it for myself, I want to share with others who might want to know what quests could possibly come up in Guild Fest.  It is on that basis that I start this simple guide to guild fest quests.


As guilds grow, their guild fest participation increases.  When looking to advance in the gauntlet ranks, you need to set higher level goals for your members.  The first goal most guilds set is for each member to average 100 points per quest.  Therefore, this guide only has Guild Fest quests that are 100 points or above.


Random quests are different from the regular quests in that a person will not know what they have to do to complete the quest until after they have committed to do the quest.  The quests are randomly chosen.  Be careful choosing these, some require you to pay real money.  For example, there is a 200 point random quest that requires you to buy 10 packs from the store.  If you are lucky, that can be as cheap as $10 (US), but if you are fully F2P, then you will fail that quest.  That said, there is a good mix between easy and hard quests in the random quests, so if you are the gambling type, grab a few of these.  You might get lucky and score some easy points for your guild.  The below screen captures show the quests that could come up when you select a random quest and explain what you will need to do and how long you have to complete the quest. 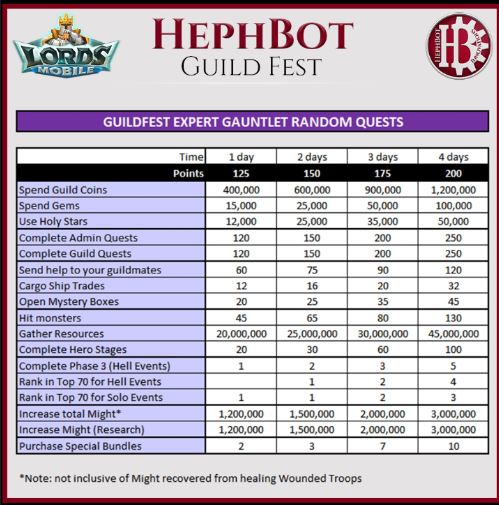 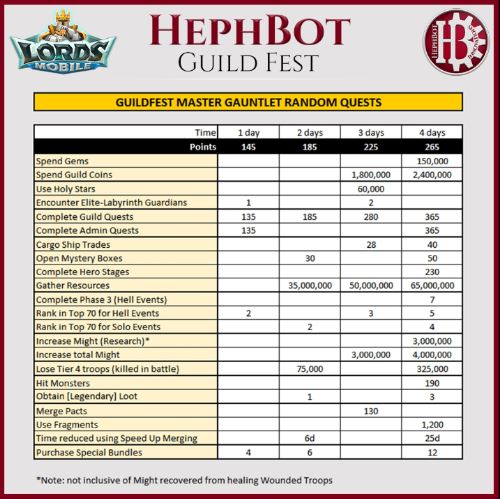 (UID: 413199125) - From what I can find, he created the first good list of all guild fest tasks several years ago and this was the inspiration behind the spreadsheet my guildmates and I have tried to create and present here.


Hephbot - No idea who is behind Heph, but whoever it is, thank you very much.  Hephbot is incredibly helpful for all aspects of Lords Mobile so I encourage everyone to check it out.
<!--td {border: 1px solid #ccc;}br {mso-data-placement:same-cell;}-->
Rate Delete Ratings
Manage

Very nice!! Lots of hard work went into this. Great job! I'm really looking forward to seeing posts from you in the future.

I would note that this list does not include Master Gauntlet tasks. I'd also combine "encounter" and "use" into one main category of "Labyrinth" (spelled correctly lol) since they're kind of related to each other.

There appear to be some quests missing. Although, it could just be my brain is fried. I feel like there are several point values for the top 70 event quests. Is this list a work in progress or a final version?

HephBot was developed by Heph. (Hense the name.) Several contributors are responsible for various aspects of the information in HephBot, but Loveskippy is the driving force behind most of it and has been the one compiling the Random Quest data. Check out the command HephBot Invitations for the full contributor list.

Also, if you don't know what HephBot is, it is a Lords Mobile help bot on the free messenger app Line. It is a fan run information pool and not in any way affiliated with IGG. To friend it, search Line ID @mks7977e.

HephBot a great resource for short summaries. I call them recipes (add this, do this, voila). If you're looking for extremely long explanations that include the why behind the recipe, I have some information on my website Lords Mobile Guides by T.

Signature
I am just an average player with too much time on my hands and an obsession with Lords Mobile. I am not an IGG employee nor am I affiliated with IGG in any way.

aka_T, thanks for the feedback.  It's definitely possible we are missing a few quests and we will be trying to update it each guild fest to make sure it is and remains accurate (and try to correct my spelling errors too.

As I'm looking over the list now, I do agree that there are some top 70 Hell events missing and possibly a ship trade or two missing.  So yeah, will definitely capture those in a couple of weeks and update.

We do have Hephbot on Line and I've friended it, but just did not know who was behind creating and updating it.  Thanks for that info.

Great list! Only thing missing is the gauntlet. Which quest comes in which gauntlet

What about the execute prisoner quests? Which gauntlets? And there are at least three different amounts... Any info on those would be great.

Hi, great post thank you! Do you or any readers here have an explanation of the extra quests available in master gauntlet? They are even more vague than the usual tasks ... any help appreciated.