But, there is too much of customization in this game.

Let me summarize for new readers

ArkGaming on Mar 21
Testing Rose Knight, he heard it was one of the top pick for top players

It is a confirmed that TRACKER is the best DPS hero in game.
The rest of the information is up for you guys to judge.

p/s : mixing with MATK heroes with Prima might be a good idea.

p/s : I seriously don't understand why he is a good choice. there are other heroes who can offer some 3s stun or silence. Reduce M-CRIT while he himself is doing P-DMG?

p/s : this hero is good. by reducing DEF, you can mix P-DMG heroes with him.

p/s : According to ArkGaming, this hero is probably one of the best support heroes, and I agreed. Mix this hero with Scarlet.

p/s : According to ArkGaming, this hero is the highest dps hero.

In the end, you do need a lot of disables and stunners.
In most of the times, single dps is better than AoE dps, as every attack increase the ultimate of heroes or units faster.

(all premium heroes are not included)

similar set-up with you!

Death Knight makes the best tank in the game for me so far, he dies and comes back alive, love it.

Everyone needs Prima Dona, she heals.

Black Crow has some of the best AOE damage out of the current heroes i have tried.

The Big Guy is nice, but you need to spend money to obtain him. Here is my current line up below, i am still yet to try out all the heroes in this game. 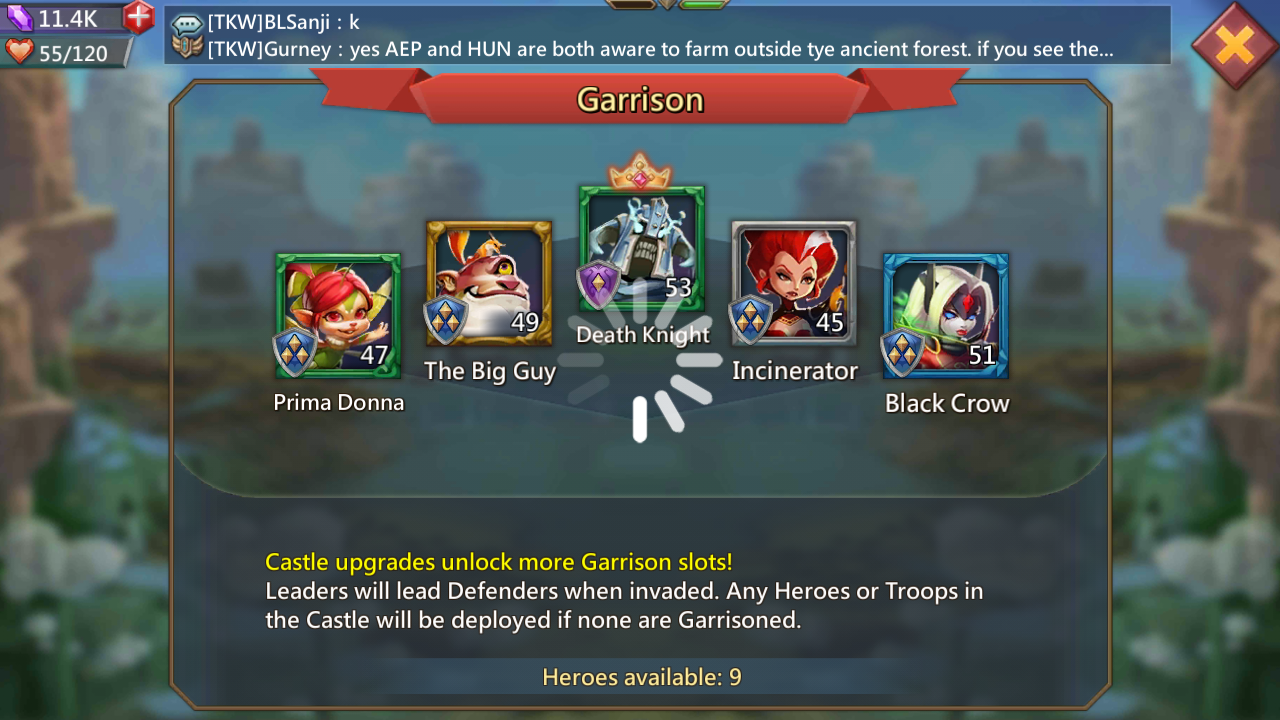 coconutwei Rated on 2016-03-14 01:21:29
The big guy is what I failed to find out how to obtain him. (Most top players had him, so I figure they got him for reasons) I'm trying to get Black Crow, and Death Knight as well. Prima Donna is a must (healer) The other 2, I am still trying to work out. Thanks for the feedback!

The big guy is what I failed to find out how to obtain him. (Most top players had him, so I figure they got him for reasons)

I'm trying to get Black Crow, and Death Knight as well.
Prima Donna is a must (healer)
The other 2, I am still trying to work out.

Thanks for the feedback!

ive tried mostly of the heroes so far till elite chapter 5!And so far ive been able to create my top 5 heroes setup:

I recommend this team only if they are updgrade to rank 4.If u do want to see this heroe review u can check my channel..Ark gaming lords mobile

Just to upade if you cant pass a current level try passing it using only 4 or 3 heroes, the less heroes you have the more damage they will take and the faster they will get their special attacks off, sometimes this is the only way i can pass a level.

I have currently hit a road block with my current lineup in stage 6-4 with my characters being all rank 7, i need to look at who to replace and how to advance further from this stage.

@ArkGamging, That's a very unique setup, ArkGaming. Thanks for the input.
@KingH, ahahah! you again! i just got my black rose. trying to level her up.

Any updates on your lineups King and Ark? I use different lineups for Frostwings. You need to outrange them or flank them and use 1 tank. Magic dpsers mostly die because of there short range.

For the Stages I use: Death Knight, Big One, Squire Fish, Prima Dona, Black Crow

ArKgaming Rated on 2016-03-24 15:59:17
Yes dutch beer ive recently changed my Death Knight with soul forger..Ive noticed that sooul forger can proc faster his main spell and with his defense decrease becomes rlly helpfull..One more thing..sea squire im noticing that his healing spell comes up very random..so now instead of counting on my healers wich make my team resist longer in battle,now im going all offensive to kill faster the enemies by putting Scarlet bolt or tracker(the highest dps hero) instead of sea squire

I have added in the fish guy into my lineup but still trying to level him to guage what he is like in later stages, on paper he sounds awesome.

I am also testing out Knight Rose, i heard she is the top hero from the top players on Lords Mobile right now.

As for the frostwing im to lazy and just run with what ever heroes need exp lol.