Welcome to Lords Mobile! Just started playing? The guide below will help you with striving to become one of the best lords on the game!


Castle - The castle is the main part of your turf. The castle level determines what types of buildings can be built on your turf, and what levels you can upgrade them to.
Wall - The wall offers protection to your castle when you get attacked. The stronger the wall, the harder it is for your foes to plunder your turf. Traps can also be built on the wall. Traps can NOT be repaired until you research the appropriate technology for it.
Barracks - Train Troops.
Infirmary - Wounded troops go here. Troops can be wounded through battle, so make sure you have plenty of space for your troops! Infirmary space will become extremely helpful as you proceed farther into the game. Healing wounded troops is always going to be easier then completely re-training all of them, especially when you get into tens of thousands of troops.
Manor - The manor produces gold and speeds up troop training. Gold is a vital resource in researching, so make sure you have a decent amount of manors in your turf.
Vault - The vault protects resources from when you get plundered/attacked. If another player attacks your turf, the vault will protect a certain amount of each resource from getting plundered. The vault does NOT protect gold until it reaches level 25!
Watchtower - The watchtower will detect when players are marching towards your turf. The higher the level, the more information you get towards the march coming towards you.
Trading Post - The trading post allows you to send resources back and forth between players in your guild. Other guild members can help you with resources if you have a trading post on your turf.
Embassy - The embassy allows your guild members to garrison troops in your turf to help for defense.
Battle Hall - The battle hall allows you to create a rally with your guild members to attack a target.
Workshop - The workshop allows you to create equipment for your hero. Your hero can be found by clicking in the portrait in the top left of your screen. Equipment is very helpful towards boosts on your turf- such as construction speed, research speed, or even troop stats, such as infantry attack or ranged defense.
Academy - The academy allows you to research technology that will aid you. There is a large amount of technology, and all of it will help you in some way. If possible, you should always have something researching in the academy.
Prison (level 10 castle) - The prison allows you to capture other player's heroes. Captured heroes are stored in the prison. Keep in mind that other players can also capture your hero, so be careful! Once you have captured a hero, you can click on the prison building and do three things; ask for a ransom, release them, or view the profile of the hero's owner. Captured heroes escape after a certain amount of time, and that time increases as your castle level increases. If a player has a captured hero and you successfully attack that player, all captured heroes will be released upon winning the battle.
Farm - The farm produces food.
Sawmill - The sawmill produces wood.
Quarry - The quarry produces stone.
Mine - The mine produces ore.


A decent setup for non-resource buildings (excluding manor), would be something like the following;


Barracks train troops, and you can always complete one batch after another ends. Replacing a barrack with an infirmary for extra hospital space could always be helpful. Manors produce gold, and gold prices for researching technology is going to get expensive after some time. Infirmaries store/heal wounded troops. If you have more troops then infirmary space and you lose a defense, all troops that would overload the infirmary would completely die. Make sure you have plenty of infirmary space for your troops! 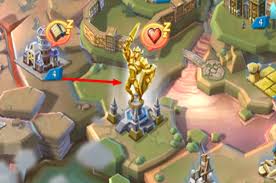 Hero stages are a place where you can recruit new heroes and improve your current ones. Hero stages can be reached by clicking the golden statue on your turf. In hero stages, trophies are granted upon passing each stage. These trophies are used to enhance your heroes. In 'elite' mode, you can be given 'medals' for passing a stage. Medals are used to recruit new heroes, or enhance the grade of any current heroes. The higher grade, the more medals required to enhance it. Completing a normal stage costs 6 STA, and completing an elite stage costs 12 STA. STA is recovered over time, and can be found under your gems in the top left.

The shelter is a VERY important part of any turf- especially in lower castle levels. The shelter can be found to the left of your castle. Any troops that are placed in the shelter are protected from attack. As you advance through the game however, you won't have enough shelter space to protect all your troops, so make sure you make up for that with plenty of infirmary space. For the lower levels such as level 10 castle and below, make sure to put all of your troops in the shelter before you- say, leave for a long trip, go to school/work, or go to bed. As long as your troops are in the shelter, they are safe from hostile players.

Four types of troops can be trained in the barracks; infantry, ranged, cavalry, and siege engines. Siege engines are really only helpful for taking down powerful walls, rather then killing troops. Since each type of troop has a weakness to another type, make sure you have an equal (or close to equal) number of infantry, ranged, and cavalry. Therefore, they can all account for each other's weaknesses.

Your main hero can be accessed by clicking on the portrait in the top left of your screen.


Every time your hero levels up, you get talent points. Talent points can be invested in one of two ways; economical/buildings, or army boosts. Research/building boosts are on the right side of the talent tree, and should be invested in, otherwise you will not progress through the game at a decent rate.


After reaching level 10 castle, you can capture other player's heroes- however, they can also capture yours, so be careful. To capture a hero, you must have a prison built on your turf. Captured heroes will not provide you with any boosts on their talent tree, so any boosts your hero previously gave you will be removed until he/she returns to your turf. 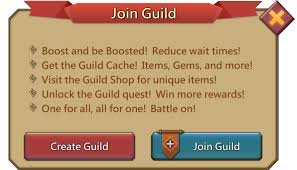 Guilds are essential for striving in Lords Mobile. Guilds have many helpful tools, as well.


-Help system to help speed-up building/research progress.
-Guild chat to talk to your guild members.
-Rally with other guild members to attack foes.
-Guild shop to purchase items. Guild coins are obtained through helping other players with their building/research progress, or through guild gifts.
-Guild gifts for defeating world monsters. The gift level of a guild determines the quality of the guild's gifts.


Many guilds require you to go to a 'hive'. Well, what exactly is a hive?


A guild hive is a location on the map where all guild members are squished together in a specific spot. The point of going to a hive is for two reasons;


1) Protection.
2) Resource help. Players can easily help each other with resources if they're right next to each other.


The cargo ship allows you to exchange resources for items, or even other resources. 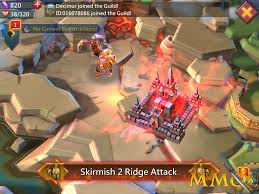 Turf battles are battles against NPC's to unlock more building spots on your turf. Troops do not regenerate on skirmish battles- so once you kill a troop in a skirmish battle, that troop stays dead. Excluding that, a skirmish battle is the same as a normal battle- you have to break through a wall before being able to attack the NPC's troops. Skirmish battles can be VERY difficult and can cost you some troops, so be careful about mindlessly doing one. You can always see the amount of troops left on a skirmish battle by scouting it.