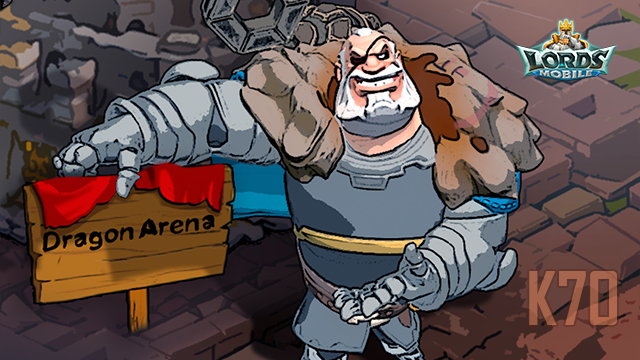 Dragon Arena is a new feature will be added to Lords Mobile in the upcoming update. Who's ready for this new challenge? Here are some key points that you care about most:

⭐️You can use the points from Dragon Arena to redeem a new hero!!!⭐️

--- When the event starts, guild members from 2 guilds will be sent to the battle arena (K70) and occupy Strongholds to get points
--- 6 different types of Strongholds, 20 in total, each provides different useful utilities
--- No Infirmary limit. Battles in this event will only injure troops (including Familiar skills)
--- Healing troops does not require resources, only time
--- Troops will automatically be healed when players leave the battlefield, same for traps and wall

Some Sneak Peak from official posts:

Phase one: Preparation
Enter battle arena. Players will be sent to their team area. Players cannot attack or relocate during this phase.

Phase four: Caravan appears
When a Caravan reaches a Stronghold, the side that has occupied the Stronghold will earn points.
If a Stronghold is currently being battled for, the Caravan will stop until a side emerges victorious.

How do you like these? Tell us below! Stay tuned for more sneak peeks about this upcoming event!

Whenever during the games, you see the different popups of scamming alerts then you must be aware. From now onwards, https://www.topaustralianwriters.com/assignment-geek-review/ this link is giving the ideas so that you can present more ways.<!--td {border: 1px solid #ccc;}br {mso-data-placement:same-cell;}

I love to read informative posts and you are doing it exellently. Hall of Fame

I am glad to read this article. google