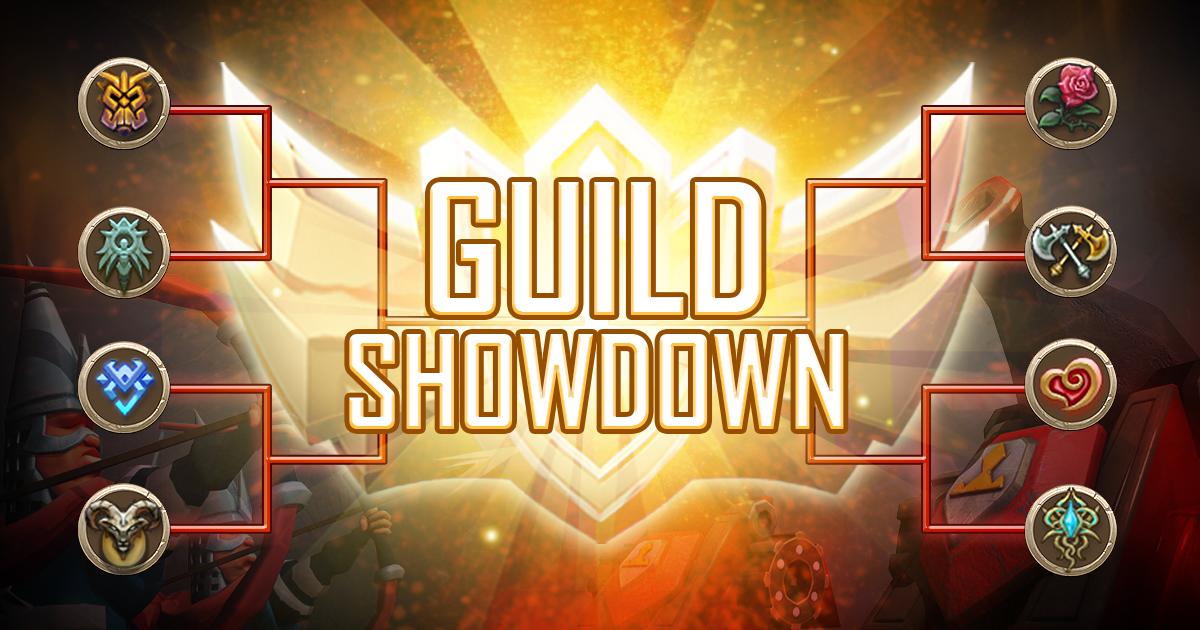 We prepared more details about the upcoming "Guild Showdown" feature for you!
1. Event Procedure
A. Registration: Players in any guild can register for this event. Players will have to choose an army to participate in this event while registering.
B. Preparing: Registration ends, and all eligible guilds will be placed into groups
C. Match starts
D. Rewards
E. Changing Guilds: During Registration, the system will record the guild which the player has registered for. Their information will be saved even if they leave the guild.
2. Army registration
The system will record troop information & boosts when the player registers their army. Any changes that occur after registration will not be reflected during the event.
Players will start each round with their full registered army. Registered troops will not be lost due to battles in the Guild Showdown.
3. Battles
A. Tag match. Players will fight their rival guild’s contestants from weakest to strongest. Troops and/or heroes who die in a battle will not progress on to the next battle
B. The number of contestants required will depend on the Gauntlet the guild is in.
C. Each battle will take a fixed amount of time before the battle results are shown
D. Any actions related to the Guild Showdown will not activate Battle Fury
E. The player’s Army Lineup and army boosts (e.g. talents, equipment) will be recorded when they register their army.
4. Event Format
A. Each group will have 16 guilds. Each match = 1 guild vs 1 guild. The guild that loses the match will be eliminated. There are 15 matches in total.
B. There are 25 Gauntlets. New Guilds will start from Division 1.
C. Division Levels: Guilds will be placed into Divisions based on their might (Only for the first Showdown)
D. Guild Rankings: Rankings will be based on event points. (Each battle won = 1 event point.)
E.g. Each group will have a maximum of 16 guilds.
If there are only 4 guilds in a group, all 4 guilds will advance to the next Division, as they are the top 4.
If there are only 6 guilds in a group, the top 4 will advance to the next Division. The remaining 2 guilds will stay in the current Division.
If there are only 14 guilds, the top 4 will advance. Only rank 13-14 will drop to a lower Division. (In normal cases, rank 13-16 will drop.)

How do we sign up for the guild showdown

How do we register for this event?

if you acturly would read the event before asking questions you would have noticed this: 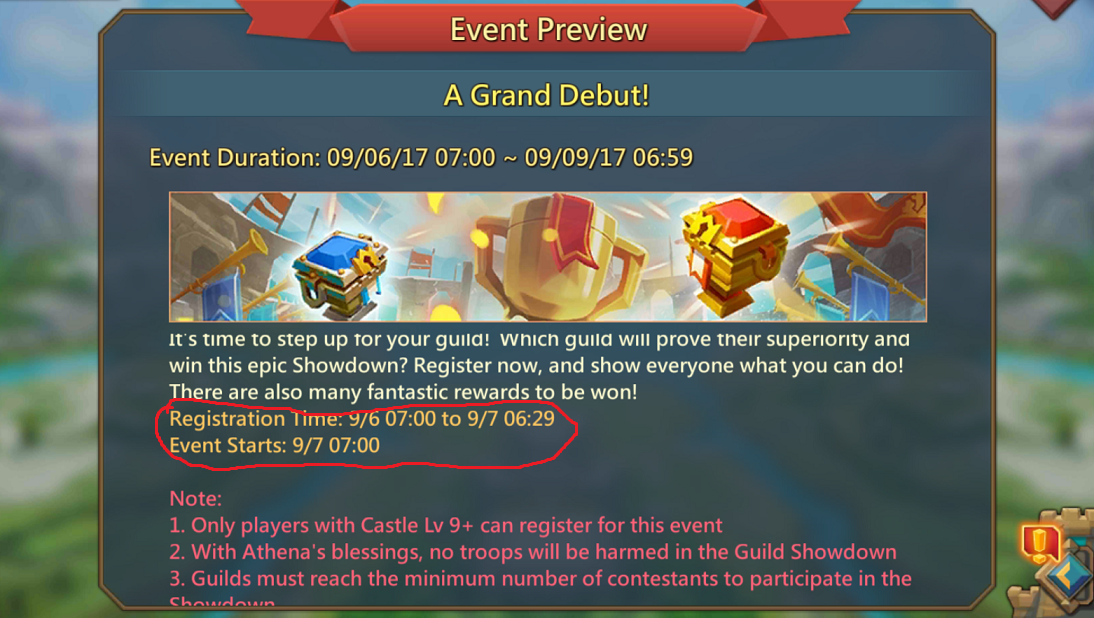 ShatBag Rated on 2017-09-05 19:46:53
Thing is whats confusing people is its clearly states REGISTER NOW means to many members reading they can register now ready for it to start..

Signature
The beauty of life does not depend on how happy you are, but how happy others can be because of you.

Will we be engaging the enemy's wall or is it strictly troop vs troop?

So do you know the minimum players in each gauntlet

Do we need siege to attack too?

What do I do after I register without the proper talerts? If I change my army lineup will it change my new set of talents

BaldDude Rated on 2017-09-06 16:32:11
No it does not. The description in the game clearly states: "The player's talents, equipment, turf boosts, army line-up and might will be based on what was equipped /active upon registration" So the stuff that you got active/set/formed is what will be used in battle when u press the registration button. After registration change your army line-up but that's it. Changing talents, armor and stuff after registering doesn't do anything... Why? Because you already registered your stuff and you can only register those things one time. There is also another annoying thing when u use army 20% boost. See #3 on http://lordsmobile.forum.igg.com/m/topic?ctid=7280

We have 48 players when event starts and now we required 50 players. There's no logic.

BlackBird71 Rated on 2017-09-07 11:35:38
How true ensar, we had 48 aswell and were mislead by the information provided as going by the IGGs rules and regulations "guilds that do not meet the required minimum contestants will be relegated to a lower division" But the information that was crucial but was missing was that divisions 1 through 5 had a minimum of 50 contestants needed to participate which was only able to be seen when we were told that we could not participate at all in guild showdown in division 6 as we didn't reach 55members for division 6 but we were lead to believe that we could still participate in a lower division if we didnt meet the required participants needed for division 6... very misleading not knowing the absolute minimum number of participants needed in order to participate in each and every division considering we are told that we can still compete in the showdown just in a lower division. Completely misleading to users who spent gems and GCs in purchasing boosts and talent resets to gain the best chance of competeing which have now all been a complete waste which could have been avoided if clear and concise information regarding all rules, regulations and parameters involved in being able to participate were provided by IGG in the first place.. Severely disappointed with the lack of integrity shown by IGG in which thousands of users were mislead and taken advantage of, whos first experience with the only feature that provided a slight improvement in the degree of fairness it provides when it comes to battles between users eg: ( Player might Vs equal or close to the same might).. will now be feeling like IGG has reached the peak of unfairness when it comes to charging copious amounts of money to international users for the same product provided to certain other countrys at a significantly lower and to be honest a ompletely unfair price set.