[News] Are You Ready for Kingdom Wars? 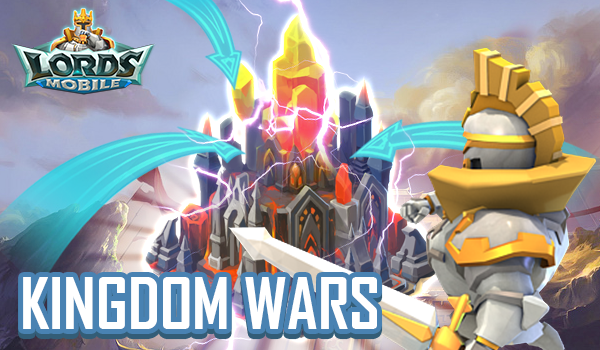 Kingdom Wars Countdown! We hope you're as excited about the new update as we are!

Here are some more details about Kingdom Wars that we want to share:

Start of the Event
1. There will be a special News icon during Kingdom Wars.
2. There will be three events: Kingdom Wars, Guild War, and Solo War.
3. The victors of Kingdom Wars will be determined by Kingdom Rankings. Kingdom points will be shared by all players from the same home Kingdom. This event will last for one day.

Ranking rewards: All participating Kingdoms will receive Gem Lodes. Kingdoms that get a higher Kingdom Rank will be blessed with higher level Gem Lodes.

4. Guilds can battle it out in “Guild War”. Guild points will be shared by all players in the same Guild. When a Guild reaches a checkpoint, all guild members will receive the checkpoint rewards.

Guild rankings will be calculated after the event ends. Guilds with a high rank in this event will receive many great rewards.
This event lasts for a day. Guild members can accumulate points during this time.

5. Players can also get solo points for the event, “Solo War”. They will receive rewards once they reach a checkpoint. Ranking rewards will be distributed after the event ends. This event lasts for a day.

Battle Period
1. Players can only stay in rival Kingdoms for 4 hours. They will be instantly transported to a random location in their home Kingdom after this battle period ends.

2. The Battle Period (4h) will be reset when players re-enter a rival Kingdom

The commander and all guild members who helped occupy a base or fort will earn Solo Points. They get a fixed amount of points for every minute the base/fort is soccupied.

Guilds occupying bases/forts will earn Guild Points. The guilds get a fixed amount of points for every minute the base/fort is occupied.

Kingdoms occupying bases/forts will earn Kingdom Points. The base/fort will belong to the Kingdom of its Overlord/Conqueror. Kingdoms get a fixed amount of points for every minute the base/fort is occupied.

Defeating Rival Soldiers for Points
1. During Kingdom Wars, enemy Turf and Resource Tiles will change in appearance to make them immediately clear to players.
2. Players will earn event points as long as they cause a player from a rival kingdom to lose troops in battle. It doesn’t matter if they were killed or sent to the Infirmary.

Hunt monsters for Event Points
1. You can get event points by damaging or killing monsters in a rival Kingdom.
2. This allows players with active Shields to participate in the event.

Scoring Phase
1. With 30 minutes to go before the event ends, scoring phase will begin. During this period players will no longer be able to earn points.
2. Base and Forts will go into either Protection or Battle Phase.
Protection Phase: At the start of scoring phase, Wonders that are occupied will enter Protection Phase. The Owner of the Base will become the Overlord or Conqueror.
Battle Phase: Unoccupied Wonders will enter Battle Phase to give players another chance to occupy them.
Players can only use “War Transportation” to return to their own Kingdom. [Once the Battle Period is up, you will be transported back to your home Kingdom. You can also return to your home Kingdom before your Battle Period ends via War Transportation. (You cannot move to rival Kingdoms if you return to your home Kingdom when points are being calculated.)]


The Battle Period will be reduced to ensure that players return to their own Kingdom and not remain as targets in a rival Kingdom.

Good luck and thanks for playing.