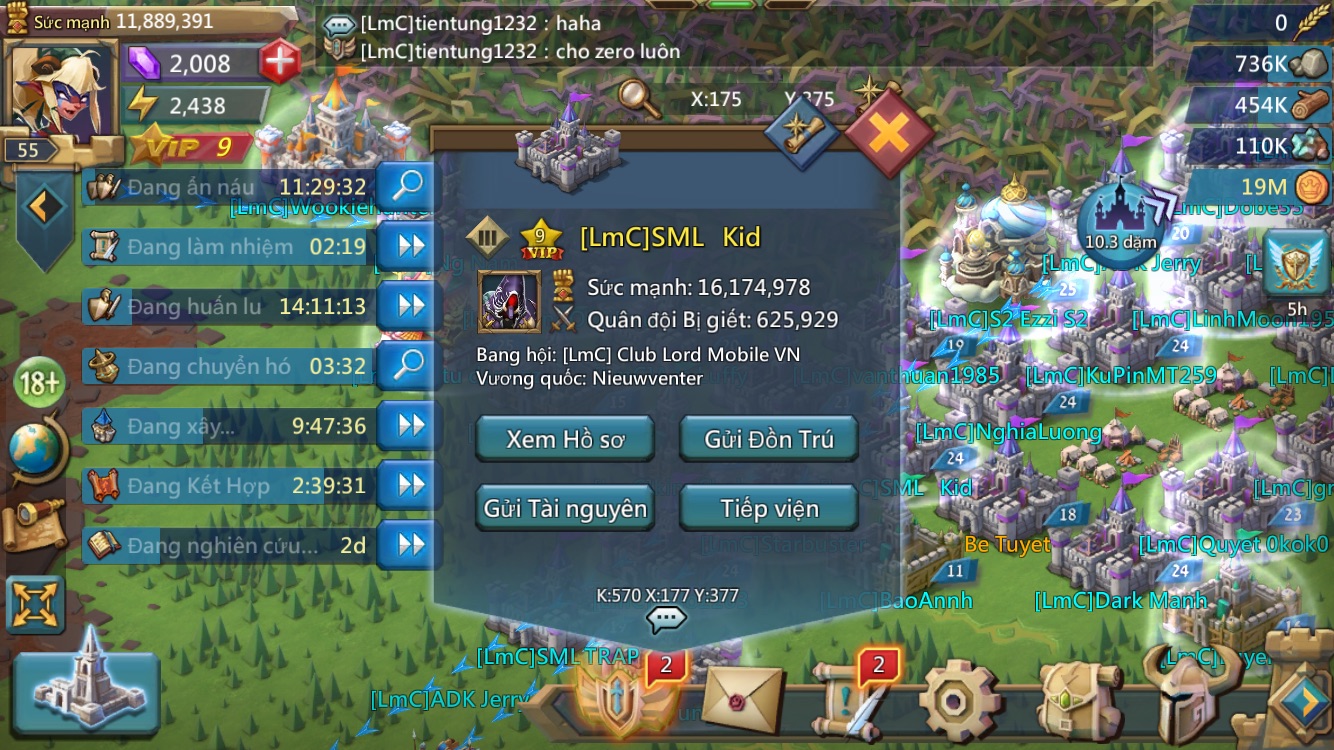 I'd like to make the following suggestions:
1) Add a feature to auto-shield when current shield reaches 5 minutes remaining. This could be part of the subscription.
2) Allow shields to be stacked instead of replaced. So if I have 2 hours left on my shield and I click to add an 8 hour shield, it should add 8 hours to the 2 hours making it 10 hours remaining.
3) Make the Cabinet filterable by Set, Type, and Feature: Like if I want to see all gear with Cavalry Attack - or if I wanted to see all Champion Gear - or if I want to see all Champion Gear that has Cavalry associated with it.
4) Create a sell button for items in your bag like the food you get from the hero levels. Or add the food and the hero items to the donation box during Guild Bash events (or both)
5) Make the text in the body of messages unlimited - or at least expand the character and line limits. Its difficult to explain to newbies how things work with a 1000 character limit.
6) Make the text in messages able to be copied and pasted and/or forwarded to others.
7) Expand shelters. Your internal shelter should be able to hold as much as you can garrison or maybe as much as you can hold in a rally.
8) You should make the innate talent swap free like you make gear swap free instead of having to use a talent reset scroll.  Those should be used for complete resets not using the innate talent feature.
9) All quests should be available in all tiers of Guild Fest.
10) When I use a speed up for a march, I don't want to go back to the map. Add a button on the speed up screen to take me back to the map automatically. OR Add the choice while on the map as a pop up.
11) I wish you could ask your guildmates for help with things other than just construction and research. Anything you can speed up should be eligible for helps like Training, Merging, building traps, Wall Repair, transmutations.
12) What's the point of having upkeep if it doesn't matter at all when the food drops to zero? Food is the ONLY resource used in upkeep which doesn't really make sense to me.  You should just get rid of the food upkeep altogether if it doesn't actually hurt the soldiers to not have any.  People just don't care about farms because of this.  So, either make the food upkeep stop, or update the production rate and make it worth people's while to grow food because without it their soldiers die (at a rate of something like 1 per upkeep tick per tier - like 1 for t1s, 2 for t2s and so on).
13) Lords Ball marches need to be faster to start.

I think that's it for now.
Thanks for the fun!
KB

DarkWarGod Rated on 2019-08-20 20:33:23
1. and 2. would be very useful, but could also be abused quitebadly, stacking shields to no limit or having enough shields to keep the auto shielder busy for eternity. 3. it would be useful for people with lots of gear 4. even if that is a function, the gem for resources rate would be terribly low, close to wasting resources. 5. I guess, but you could also srnt multiple message, split oyur copy paste message into 2. 6. this is actually something I don't mind. if someone sents coordinates, that we can press them in mail aswel. 7. there is a research and a familiar that expand your shelter up to 300k. 8. why tho? those are both things to spare you a lot of time, swapping gear was already free to begin with and talents always costs gems, making that any different because of a research doesn't make sense. 9. I'm not sure what you mean by that. 10. this is something I experience as annoying aswel, if you need to spam the winged boots, you are unable to do so because it backs you out of the menu 11. they don't do that because thise are almost never longer then a day. you would get so many helps (and thus guild coins) not to mention the 30% time reduction on all those things 12. they have upkeep to avoid rich people from easily obtaining a lot of food. upkeep effects the bigger players that need 5m food per 5k t4 and are unable to regain it back easily 13. this is already a thing, each time you kick the ball, the travel speed increases. I recommend hitting it back and forth eith t1 over your castle untill you reach the limit (1300%+).

I think we need more recolator so our group guild can stay together and rally together em i right?  Shout out to filipino playing lords mobile here keep it up!! ❤️❤️ Igg id: 739668282

As you can see, I'm not sure how this works yet, but I'm working on it consistently.

Suggestion :
Is is possible to have another addition to the game, some kind of button that only the leader of the guild can hit that turns set Allies a different color on the map and dissalows members of the allied guilds to attack each other.
The color change would then only be visible to those parties involved.

Hello, i forgot to validate my lords mobile account. And how i changed phone and cant start to play from where i was. Please Help me!

All labyrinth hell stage 3 is undoable even if you have enough holy stars because at 200 points per click it is impossible to get enough points within 55 minutes. It is the biggest unfair advantage to this game for a F2P player because it has nothing to do with skill, simply money spent. All other hell event can be achieved with conservative thinking and time but this is impossible. Trialed and tested.