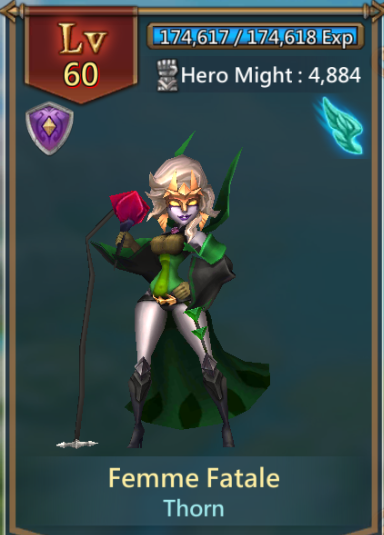 Background Stroy
"Sweet is the scent of blood.'' - Thorn

Thorn is a vampire bearing the blood of the first progenitor.
Her whereabouts and true identity are unknown. The only thing certain is that she is a lady of rare beauty. Do not provoke her, though, or she may well become your worst nightmare.

Ultimate Skill：Whip Dance
Lashes the target with a whip, dealing damage 3 times to all enemies in a large area.

Skill 2：Swift Maneuver
Slips behind the target unnoticed, dealing damage to all enemies in a medium area and inflicting Vulnerable for 5s.

Skill 4：Bloodshot
The Femme Fatale aims at the weakest spot of the target's armor and pierces it with her whip.
Increases Pierce by %y. 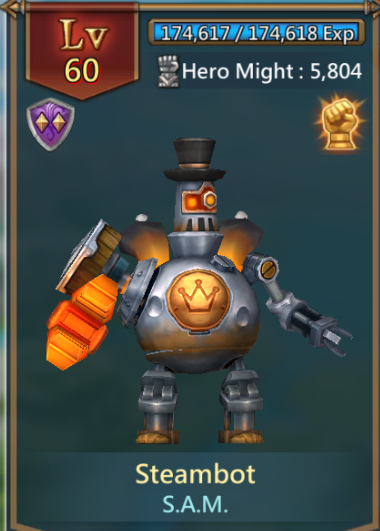 Long ago, an evil warlock kidnapped a Dwarven smith and forced him to craft a robot soldier. Yielding to the torture, the smith created the Steam
Activated Mechanoid, or S.A.M. for short. One day after a rather brutal streak of destruction, S.A.M. was refueled with some contaminated water.
Instead of breaking down, the water miraculously caused the automaton to become self-aware. Immediately developing a conscious, S.A.M. turned on the warlock and rescued the Dwarven smith. The Dwarf brought it back to his home under the mountains, where S.A.M. replenishes itself with only the purest spring water.

Skill 2：Crumple Zone
Releasing a protective cloud of steam, nearby allies in a medium area are protected from damage for 5s
Crumple Zone absorbs up to %y incoming Physical DMG.

Skill 4：Full Steam
The Steambot releases all its valves to greatly boost its ATK.
Increases ATK by %y. 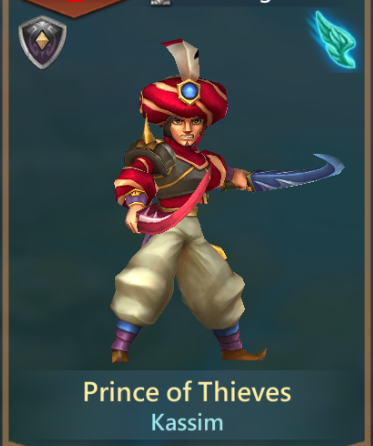 Background Stroy
"I may be a thief, but I keep my honor."－Kassim

Kassim grew up in a simple village that, year after year, was bled dry by hefty taxes. Tired of seeing his friends and neighbors suffer, he became an outlaw, robbing from the rich and giving to the poor. His notoriety increasing by the day, Kassim was soon branded as a criminal by the nobles, and a large bounty was placed on his head. None are willing to turn him in, however, and the common folk have even dubbed him the [Prince of Thieves].

Skill 3：Rending Strike
Slices enemies with his twin scimitars, dispelling their barriers with each strike.
Deals%x Physical DMG Dispels enemy barriers.\n%b
Skill 4The Prince of Thieves lurks in the shadows, waiting for an opportune moment to strike.
Reduces ATK by %y of all enemies.

Background Stroy
[Don't wind me up!] - Astre
Long ago, when the land was at peace, the clockwork dolls Astre and Etoile were the stars of the great North Circus, bringing joy and laughter to generations of boys and girls. But the war came, and people forgot how to laugh. Forgotten when the circus was abandoned, the scared and confused Astre came by chance into the possession of Anderson. The Sage worked to restore her, and even taught her some magic. When Astre was repaired, Anderson encouraged her to seek her own way in the world.Travel far enough, and you may hear folk tell of a strange girl who wanders about the northern villages, constantly asking about a star.

Skill 2: Starfall
Panics and waves her wand around, damaging nearby enemies in a small area 3 times.

Skill 4: Starlight
The Witch Doll bathes all her allies in starlight, making them more resistant to physical attacks.
Increases DEF of all allies by %y 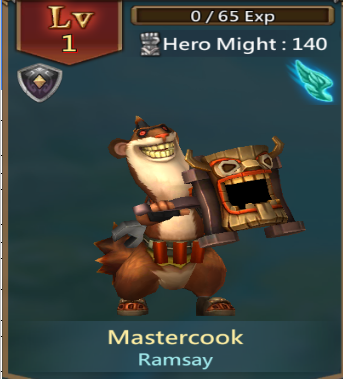 Of all the Mustelidae, Ramsay is the only one who prefers the kitchen to the battlefield. He spends his time cooking and experimenting at the stove, and his delightful creations have earned him much renown across the land. His own people, however, shunned him as an oddity and an outcast. But Ramsay showed his worth when the Muste Forests were invaded, his knowledge of heat and fire allowing him to use flamethrowers and explosives to devastating effect. His incendiary tactics turned the tide of the battle, and Ramsay the Masterocook was hailed as a hero.

Skill 2：Fillet Flambé
Scorches his target with a jet of superheated gas, damaging enemies in a line 5 times from mid
Deals%x Physical DMG per hit. 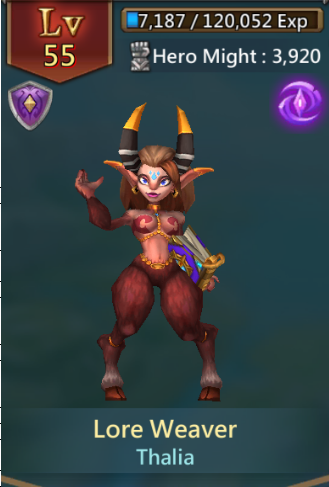 Background Stroy
[Everyone deserves a happily ever after.] - Thalia

Born in the Depths, Thalia the faun knew only a life of slavery and toil. Despite the grim circumstances, she remained optimistic and yearned to be free. And freedom came calling when Thalia chanced upon a mysterious book of tales, a powerful relic that granted her the ability to bring stories to life. Armed with this magic, Thalia and the other prisoners fought their way to the surface. The liberated Thalia now travels the world, listening to new stories and writing her own tale. Will she have a happily ever after? Follow Thalia on her journey to find out!

Ultimate Skill: Phantom Castle
Summons a magical castle from the storybook to protect allies. The castle heals nearby allies in a large area and blesses them for 6s.
Restores HP to allies.Also reduces damage taken by %y%.

Skill 3: Requiem of Rebirth
Conjures enchanted butterflies from the storybook. The butterflies will flutter between allies and can heal up to 6 times.
Restores %x HP.

Skill 4: Final Gift
The Storyteller unleashes the book's magic upon her death, healing all remaining allies. 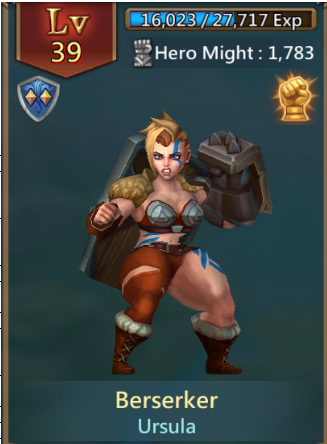 For millenia, a primitive tribe of warriors has jealously guarded the Frozen Peaks, suffering none to pass. In the blistering cold and sharp crags, there is no room for weakness and charity, and the sickly Ursula was not expected to survive past childhood. But Ursula stubbornly kept going, year after year putting all of her time and effort into strengthening her body and sharpening her skills. At her coming of age ceremony, she proved herself by being the first in two centuries to claim a bear for her kill. The name of the Berserker is now feared in all the lands that fall under the shadow of the peaks.

Skill 2: Grizzly Smash
Throws a powerful punch, dealing damage to all enemies in a medium area and knocking them back.

Skill 4: Arctic Roar
The Berserker lets out a battle cry, motivating all her allies.
Increases STR of all allies by %y 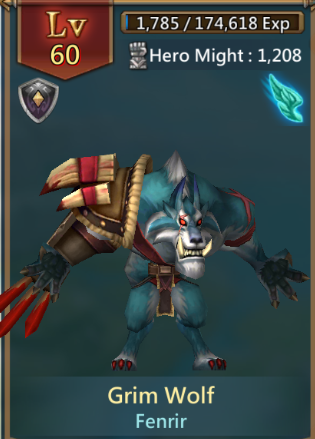 Background Stroy
[A bite... just one morsel...] - Fenrir
Fenrir was once the leader of a dark cult, a group of men and women who worshipped the Goddess of Darkness. For their service, Nox transform into lycans, wolf-like creatures many times faster and stronger than humans. However, dark gifts come with a dark price: the bestial instincts of the lycans overpowered their humanity, and many of them turned feral. A horrified Fenrir was determined to lift the curse and save his brethren, but many years of effort turned out to be in vain. His humanity hanging by a thread, Fenrir is now driven both by his quest and an insatiable hunger, and will rip apart anyone who dares get in his way.

Skill 3: Howl from Beyond
Lets out a ferocious howl, dealing damage to all enemies in a medium area, and restores HP for 5s.
Deals %x Physical DMG.Regains %y HP per second.

Skill 4: Bloodlust
The Grim Wolf is overwhelmed with a craving for blood.
Increases Life Leech by %y. 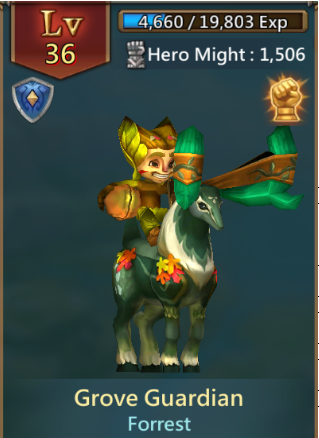 Background Stroy
[Time for the hunters to be the hunted!] - Forrest
A dryad born in the mystical Woodlands, Forrest has always longed for adventure. However, he was forbidden to step outside his homeland due to the dangers lurking outside. One day, while playing in the groves, Forrest caught sight of a fearsome cyclops hot on the heels of an injured fawn. Desperate to save the young animal, Forrest fired a shot at the cyclops with his trusty slingshot, and hit the monster right in the eye. The grateful fawn stayed by his side, and after years of training, Forrest and Bucky - as he named the fawn - are a fearsome duo that will take out anyone who dares threaten their home.

Skill 4: Feel the Burn
Every so often, the Grove Guardian flings a burning seed at his target, dealing damage to nearby enemies in a medium area.

Thanks for this informative posting of the heroes! :-)