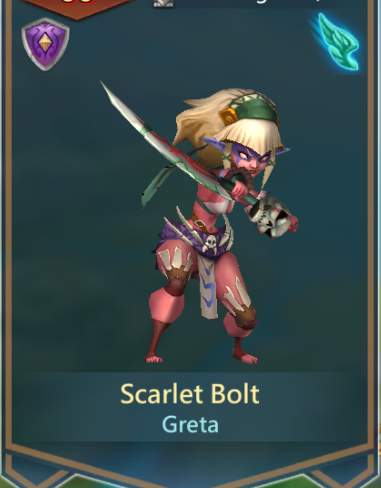 Greta grew up in a jungle where everything obeyed one golden rule - Survival of the Fittest.
Faced with the threat of death at any moment, Greta learned to strike before others did. Her movements are swift and ruthless, honed to kill efficiently.
Greta's habit of licking the blood off her blade strikes terror in her opponents. No one enjoys watching a savage drink blood.

Ultimate Skill：Backstab
Sprints at blinding speeds to attack an enemy from behind, dealing damage and inflicting Vulnerable for 5s. 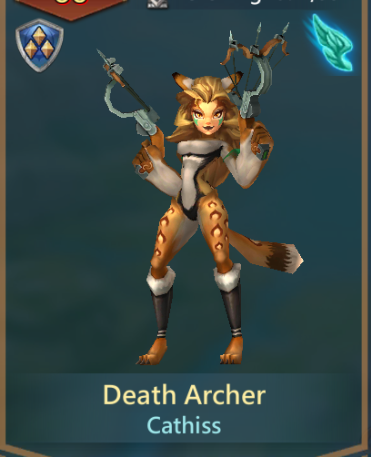 With her beautifully innocent eyes, Cathiss seduces her victims and lures them in for the kill.
She treats her victims like toys, finding pleasure in torturing them.
She sets out aiming to prove her superiority over the Elves." 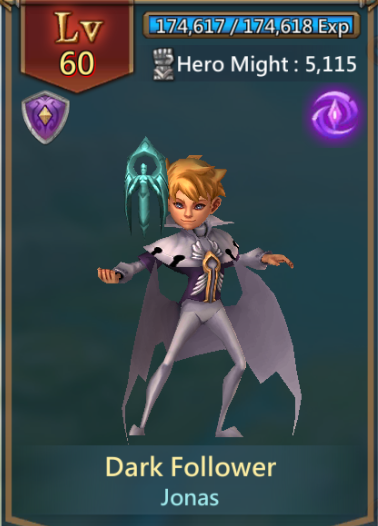 Background Stroy
"'The world shall burn in eternal darkness!'' - Jonas

Jonas lived in a sanctuary all his life, hoping to be its leader someday.
But his dream ended when a dark entity possessed his body and destroyed the sanctuary.
As a slave to the darkness, he continues to fight this hopeless battle. Will he ever be free from this curse?" 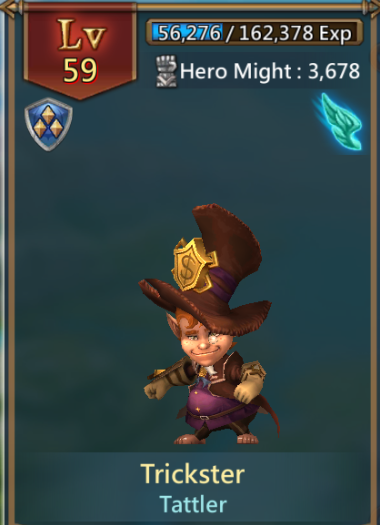 Tattler spends most of his time at the bar, enthralling the ignorant with tall tales to cheat their money. This was how he earned the nickname ''Trickster''.

Skill 2：Tampered Arrow
Coats an arrow with a secret substance before firing, dealing damage and inflicting Disarmed for 5s.

Skill 4：Getaway
Moves like a shadow. Before you know it, he's gone. 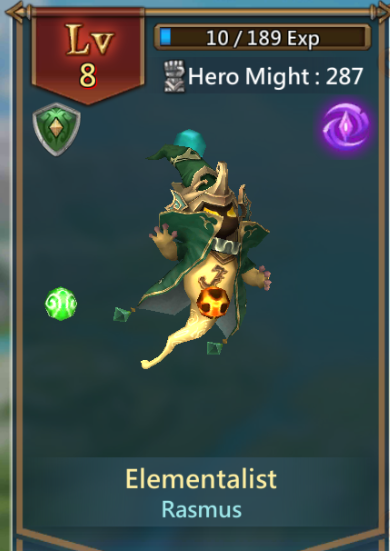 Background Stroy
"Balance is the Way of Life.'' - Rasmus

Rasmus is a 20,000-year-old guardian of the Elementals.
He shows great interest in the physical realm and spends his life there researching its wonders. As time passed, the disrupted balance between the Elementals troubles Rasmus.
To set things right, he is willing to sacrifice anything.

Ultimate Skill：Seismism
Summons long range tremors that shake the earth, dealing damage to all enemies in a line.

Skill 2：Elemental Shot
Releases a magical arrow fused with the power of fire and ice, dealing damage to all enemies in a small area around the target.

Skill 3：Art of Wind
Sends a strong wind across the land, reducing MDEF for 8s.
Reduces MDEF by %y. %b 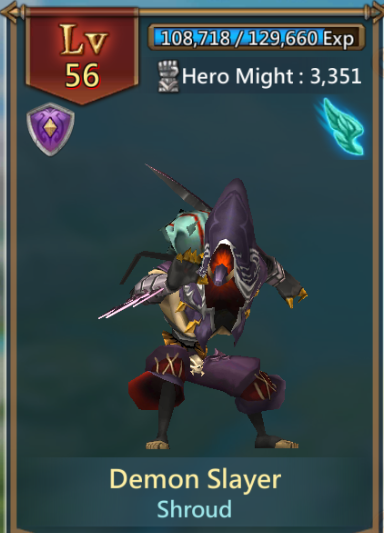 Background Stroy
"Miltina, I shall see you again in death...'' - Shroud

Shroud is the second son of the Hailors family and a fearsome warrior. His life changed forever when he fell in love with Miltina, a female Elf who rekindled kindness in him. But their blissful days ended when she perished in a fire set off by Shroud's foes. Torn by grief, Shroud surrendered to Infinity's will for the power to avenge his lost love.

Skill 2：Silent Ambush
Advances behind the target for a surprise attack, dealing damage to the enemy. 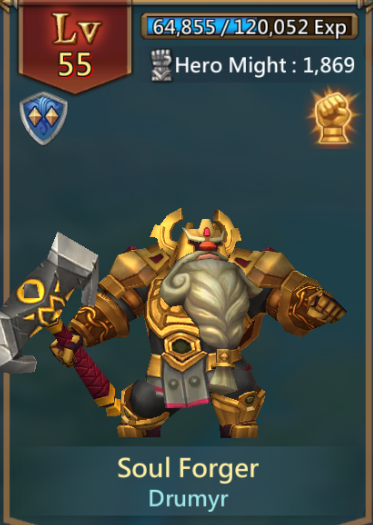 Background Stroy
"I shape the world with my hammer!'' - Drumyr

Drumyr delights in parties and fashioning beautiful artifacts out of scraps. And so, the Dwarves called him ''Soul Forger''.
Despite his remarkable skills, Drumyr has a poor sense of direction. He seldom leaves his kingdom for fear of getting lost.

Ultimate Skill：Whirl Smash
Waves the hammer in a spiraling motion, dealing damage to all enemies in a large area, inflicting Vulnerable for 3s for 5s.
Deals %x Physical DMG per second. Vulnerable enemies' PDEF reduces by %y. %b

Skill 3：Shatter
Jumps on target from long range for a shattering blow, dealing damage to all enemies in a line and reducing ATK for 5s.
Deals %x Physical DMG. Also reduces enemy's ATK by %y. %b

Skill 4：Iron Body
An exceptional Dwarven armor that protects the wearer from even the mightiest blow.
Increases DEF by %y. 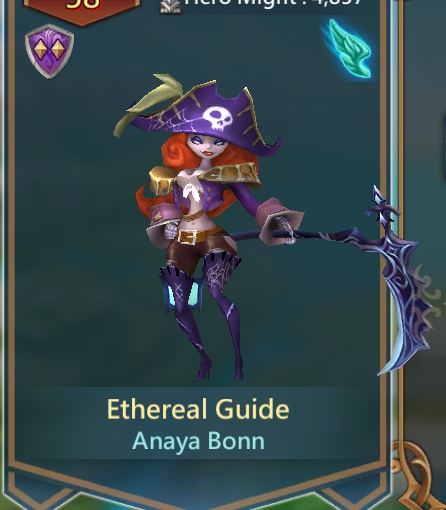 Background Stroy
"Serve me and postpone the judgment!'' - Anaya Bonn

After his ship sank, a hopeless sailor drifted at sea, waiting for death. Amid this turmoil, a large ship appeared, emitting a violet glow that ushered his dead comrades to it. On board stands a most bewitching captain. She offered a chance for life in exchange for eternal servitude.

Ultimate Skill：Soul Wave
Releases a powerful wave sweeping the target from long range, dealing damage to all enemies in a line and reducing M-CRIT for 5s.
Deals %x Physical DMG. Reduces enemy's M-CRIT by %y. %b

Skill 3：Death's Call
Commands undead spirits to attack from long range, dealing damage to all enemies in a line and reducing M-CRIT for 5s. 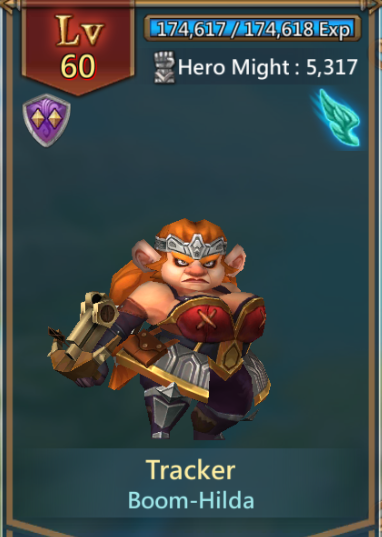 Background Stroy
"Provoke me and it will be the last thing you do!'' - Boom-Hilda

Boom-Hilda believes Dwarves are not only strong but agile too. She designed her light armor and crossbow for this purpose, turning the user into both warrior and hunter.
Her unyielding passion and temper are the reason behind her nickname ''Tracker''.

Skill 2：Arrow Storm
Rains down a barrage of arrows on the target from long range, dealing damage to all enemies in a cone.

Skill 4：Outrage
Her unmatched temper exudes a masculinity that endears her to Dwarven men. 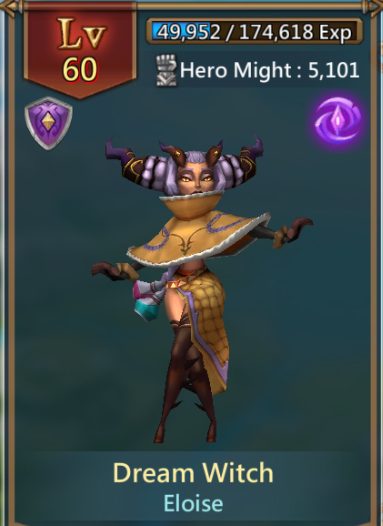 Background Stroy
"Are Men as scary as we think?'' - Eloise

Dragons have long since passed out of knowledge since they lost the battle to Man long ago.
Eloise, the young Dragon finds this legend most fascinating. Why do Dragons fear and hate Men so much?
To find the answer, she transforms into a human and sets out for the land of Men, with no idea of the dangers that lie ahead.

Ultimate Skill：Mind Blast
Attacks the target with psychic powers, dealing damage to all enemies in a medium area and inflicting Stun for 1s.

Skill 3：Nightmare
Ignites the deepest fears of the targets, dealing damage to all enemies, along with Magic DMG for 4s.
Deals %x Magic DMG. Also deals %y Magic DMG per second. %b

Skill 4：Mind Whisper
The will of the Dream Witch resonates forth and boosts allies' INT.
Increases INT by %y for all allies.